An Agronomist’s View on How to Read Greens

Don’t believe everything you hear — there’s more to it than meets the eye.
BY BRIAN WHITLARK

Golf analysts often comment during weekend telecasts that the greens are getting firmer and faster throughout the day, especially if conditions are dry and windy.

Other remarks may refer to the greens breaking towards a particular topographic feature, such as a lake, ocean, or valley. Viewers may also hear broadcasters assert that recent rains have slowed the pace of the greens. Other analysts will claim that the grain on the greens grows in the direction of the setting sun, thus the ball roll will tend to break toward the west.

Through experience conducting USGA Green Section Course Consultation Service visits and leading agronomic preparations for USGA amateur and professional championships, USGA agronomists have gained a scientific and practical understanding of the often misunderstood characteristics of putting greens. The objective of this article is to share our observations that ultimately may help the everyday golfer read greens with more confidence.

How do green speed, grain, and break affect playing conditions? What are the most common misconceptions? 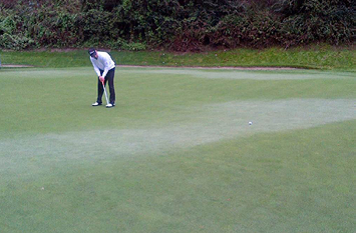 A golfer putts into the shiny turf that is uphill and into the grain. At the top of the slope, the grass changes to a dull color and the ball rolls downhill and down-grain. Courtesy USGA 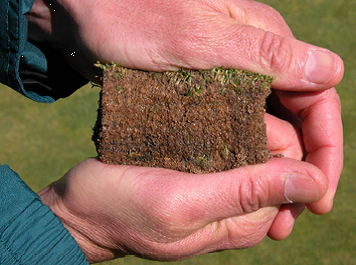 GREEN SPEED
Comment: “The sun is shining and the wind is blowing. The greens are drying out and really speeding up today.”

It seems every weekend when conditions are dry and windy, golf analysts will comment on the putting greens increasing in speed as the day wears on. Golfers of all abilities will be interested to know that regardless of heat, dryness, or wind, it is highly unlikely that the greens will gain speed. 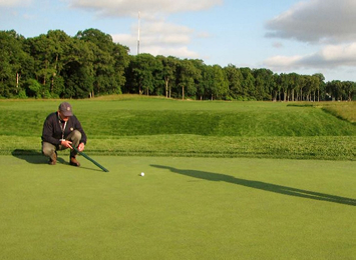 Green speed measurements using the USGA Stimpmeter are collected at least twice daily on putting greens leading up to and during USGA championships.  The data collected over hundreds of days and on thousands of greens shows that green speed does not increase during the day, but typically decreases from morning to afternoon (Championship Green Speed).

Intuitively, one might assume that as the surface of the green dries,green speed will increase. However,as the turf grows, the friction on the surface of the ball increases and slows ball roll. To lessen the effect of turf growth on green speed, turf managers apply growth regulating compounds.  Although greens treated with growth regulating products lose less speed when compared to nontreated greens,speed loss is still inevitable.

Thatch levels can also affect green speed. Dr. James Beard, a leading authority on turfgrass science, defines thatch as “an intermingled organic layer of dead and living shoots, stems, and roots of grasses that develops between the turf canopy of the green vegetation and the soil surface.”  Typically, the more thatch, the greater the potential for decreased green speeds. When thatch is compressed during morning mowing and rolling activities, it acts like a sponge and will decompress or “bounce back” over several hours. As a result, green speeds slow down.

If readers are still skeptical about green speed decreasing throughout the day, perhaps additional sources will make you a believer. Paul Vermeulen, PGA Tour agronomist, manages numerous PGA Tour, Champions Tour, and Web.Com tour events every year. During a recent phone conversation, Vermeulen revealed that green speed at PGA Tour events decreases by about 6 inches on average on a daily basis.  However, there are rare exceptions.

If an area of a green is experiencing significant wilt, it may not lose speed or it may gain a marginal amount of speed during the day. Vermeulen also noted that when greens approach very high speeds, e.g., 13 feet as measured by the USGA Stimpmeter, ball roll will likely decrease by more than 6 inches from morning to afternoon.  Slower greens (measuring 9 to 10 feet in the morning) will likely lose only 3 to 6 inches throughout the day. Essentially, the faster the green speed, the greater the potential for speed loss from morning to afternoon.

Steve Isaac, director of golf course management for the R&A, manages agronomic preparations at the British Open Championship. He has observed that green speed most often begins to decrease after the morning mowing or rolling and continues decreasing into the afternoon. However, he did mention the odd incidence of green speed increasing in situations of low fertility, golfer traffic, and dry, windy conditions. He acknowledged that this phenomenon may be unique to the links environment.

University research has confirmed that green speeds decrease during the day. A study at Oregon State University involved 240 Stimpmeter readings per day, totaling 7,200 measurements per year. The study concluded that ball-roll distance decreased an average of 6 inches from morning to afternoon (Mcdonald, B.W., et al, 2013).

The bottom line is, if you have an afternoon tee time, you can bet your two-dollar Nassau that the greens will be slower than they were for your fellow golfers playing in the early morning.

FIRMNESS VERSUS SPEED
Comment: “The firmer the surface, the faster the green speed.”

Intuitively, one would think that putting green speed of dry, firm greens would be faster than the speed of wet, soft greens. However, experience from working USGA Championships and communication with USGA and PGA Tour agronomists confirm that soil moisture has a negligible effect on green speed. For example, rain saturated Merion Golf Club during the 2013 U.S. Open, but green speeds remained at championship levels. Yes, it is possible to have wet, fast greens and firm, slow greens.

Greens built within the last half century may not necessarily slope toward a particular topographic feature like a lake, valley, or ocean. On modern greens the ball will break where surface water drains from the putting surface. Courtesy USGA

GRAIN
Comment: “This putt is directly into the setting sun so although the putt is uphill a touch, it will be faster because it is down grain.”

Grain in putting greens can be described as the horizontal orientation of turfgrass leaves and stems. Bermudagrass and bentgrass species, especially older varieties of bentgrass, exhibit grain while Poa annua has very little grain, if any. Turf managers employ a variety of techniques like grooming, brushing, and vertical mowing to encourage upright turf growth and minimize grain. Furthermore, when turfgrasses are mown at 1/8 inch or less, any effect of horizontal leaf orientation on ball roll is minor.

Which direction does grain grow? Is it toward the east in the early morning and then west in the afternoon? Does it grow toward the ocean or a nearby lake or valley? No, grain grows downhill.  This is due to various factors. Grain follows the direction of surface water. Additionally, regardless of the mowing direction, the roller and the drum on a mower will flatten the turf in the direction of the slope. Like all plants, turfgrass exhibits phototropism, which is the orientation of a plant or other organism in response to light.  However, when maintained at less than 1/8 inch, turf leaves and stems do not change their orientation in relationship to a light source (personal communication, Dr. Bingru Huang, Rutgers University, Department of Plant Biology and Pathology, specialist in turfgrass physiology).

The bottom line is that grain on bentgrass and bermudagrass putting greens has a minimal effect on ball roll, and when grain is present it grows downhill.

THE INFLUENCE OF LOCAL TOPOGRAPHIC FEATURES ON BREAK
Comment: “The players need to keep in mind this weekend that the natural tendency of the ball is to break toward the ocean.”

On any green, the ball will break where water flows — i.e., downhill.  Greens that were built more than 50 years ago without large earthmoving construction equipment will tend to slope with the general lay of the land.  However, the slope on more recently built greens may not cant toward any specific topographical feature. In fact, many greens are pitched away from streams, lakes, or wetlands to avoid runoff and to protect the environmental integrity of golf course ecosystems.

The bottom line is that on most courses, there is no “general” tendency for the ball to break toward a valley, stream, lake, or ocean. The ball will break downhill where water drains from the green, which may be several locations on a green depending on the design.

During your next round of golf, remember that when playing in the afternoon the greens likely will be slower than they were in the morning. The grain, if any, will have minimal impact on ball roll, but if it does, the grain will accentuate the roll in the downhill direction. In addition, be skeptical of the notion that the greens will have a tendency to break “away from the mountains” or “toward the Salton Sea.” The ball will simply roll down slope, which more than likely is exactly how the architect designed and built the greens.

BRIAN WHITLARK is an agronomist in the Southwest Region.  Reprinted with permission from the USGA