Members interested in entering the contest should upload a photo of their design to Facebook by Friday, Nov. 20, at midnight ET. Voting will take place on the association’s Facebook page, and the winners will be named on Friday, Dec. 4.

“With close to 50 applicants last year, we are excited to announce our most popular contest has returned for the third consecutive year,” says Kim Heck, CEO of the STMA. “Some of the best field art in the world is produced by our members, and this contest provides a prime opportunity for them to showcase their creative styles.” 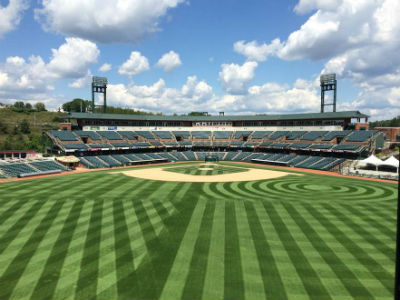 Last year’s winner Ben Young, former Altoona Curve head groundskeeper, won for his “four patterns” design he created at Peoples Natural Gas Field. Young has since moved to the same position with the Memphis Redbirds but his work with the Curve was featured in Ballpark Digest, PanStadia & Arena Management and Sports Illustrated.

Joey Stevenson, head groundskeeper for the Indianapolis Indians, was the contest’s inaugural winner in 2013. Stevenson received the Sports Turf Manager of the Year Award for the third year in a row from the STMA and Minor League Baseball in the Triple-A division.

There is no need to be intimidated — previous winners will not be considered for the contest either.

The Mowing Patterns Contest winning design will have a custom poster featured at the 2016 STMA Conference & Exhibition Jan. 19–22 in San Diego, Calif.