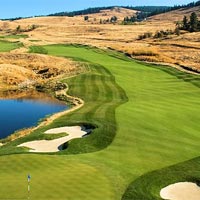 In September of last year, the Supreme Court of British Columbia appointed MNP Ltd. as Receiver of the assets collectively operating as The Club at Tower Ranch.

Since then they have been trying to get someone to buy the facility that suffered during the economic downturn. The real estate oriented development had disappointing homesite sales over its five years of operation.

The receivers confirmed in a phone conversation last week that the assets had been sold and expected the specific purchasers to be announced sometime this week.

Now according to Okanagan news website www.castanet.net,  "... the winning bid went to the Carrington Group of Companies from Edmonton."

The price for the course was $3.9 million plus tax a far fry from the constrcution costs which must have been in excess of fifteen million dollars.

According to reporter John Thompson, the new owners, who are in theretirement community business, are interested in purchasing the real estate component currenly owned by Intrawest.