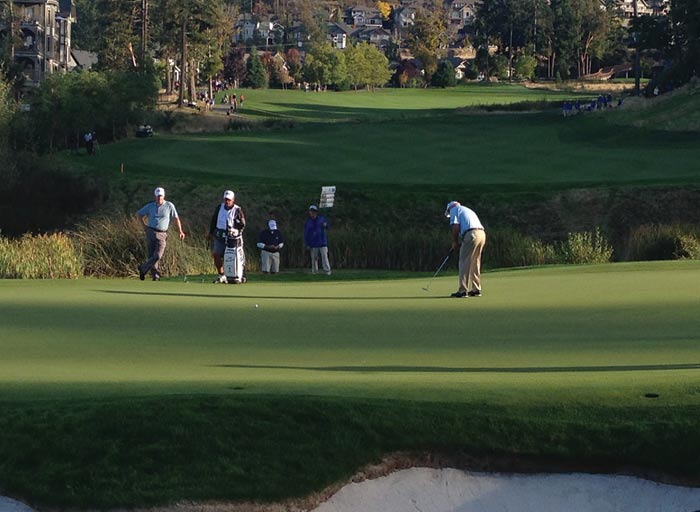 When Bear Mountain's superintendent team of Kyle Kemball and Chris Ainey got the word they would be hosting the world's best over-50 players in just 18 weeks time, they knew they had some planning to do.

Normally, PGA TOUR tournaments like this are initiated literally years in advance. A decision by event organizer / sponsor Pacific Links International, however, to move the tournament from China to Canada compressed this period to just under five months.

Hosting the tournament at Bear Mountain was a natural choice. TThe 36-hole Nicklaus-designed layout is more than strong enough to test the world's best and visually, its setting is hard to match.

Also Bear Mountain is a part of the group of clubs partnering with Pacific Links to allow reciprocal play for members at many facilities worldwide.

Add in that development owners Ecoasis have a strong real estate component that they want to market and you have the perfect mix for hosting the PGA TOUR Champions.

Still the logistics of putting on a tournament of this size and stature in such a short time frame would be daunting to say the least.

For Kemball and Ainey, they did have one advantage having both been at Bear Mountain during the Telus Skins Game in 2010.

Actually, their history at the facility goes back a lot further than that.

Kyle a Fairview College alum, has been in the turf grass business since 1986 starting at Pine Falls in Manitoba. He moved to Victoria BC in 1992 and started work at  nearby Gorge Vale. After a stint at Cordova Bay and some work during the reconstruction at Gorge Vale, he moved to Bear Mountain when it opened in 2002.

Chris has actually spent his entire professional career in Victoria.  "I am an island boy, he confirms. "I started in '96 at Ardmore out on the (Saanich) peninsula. And from there I went to here actually in 2003." His educational background includes a degree from UBC in Turf Grass Management.

So when they got the word, they did have that long-time experience to fall back on.

Said Kemball during and interview at their office at Bear Mountain, "I think having had the previous experience of hosting the Telus skins game in 2010 helped us out... We sort of had a good idea of what we had to do to get everything in order."

In comparing the PGA TOUR tournament to the Skins Game, Kyle said this one was "...definitely a little bit bigger."

This "bigger" process to get a course ready starts with having a PGA Tour agronomist make a site visit. In the case of the Pacific Links Bear Mountain Championship, this was Dennis Ingram, PGA TOUR Director International & TPC Agronomy who came for the first time in May.

Ingram's initial comments were that he definitely thought the players would enjoy the course, especially the back nine.  Still he saw there being a fair amount to be accomplished in preparation.

Kemball remembered sight lines as being key for Ingram. "Obviously there were a lot of things to be done," said Kemball. "The removal of vegetation to improve sight lines particularly for  the (TV)  cameras but also for the player."

Ainey added that there were the agronomy aspects also.

"Getting the courses better prepared for what players were used to. With respect to the fairways there was some thatch removal. We couldn't get to all of it in such a short time frame but we did get to what we could. We knew problem areas and concentrated on those. And then with our greens we had to bump up our cultural practises a little bit. It basically involved verti-grooming and top dressing once a week.'

Kemball also mentioned that monitoring was conducted constantly using tools ranging form a 'True Firm' ( a meter for measuring the firmness of the greens) to 'TDRs' which are meters for measuring moisture content.

They also ran real condition tests through the summer getting the greens up to the speed that the PGA TOUR wanted.

Recalled Kyle, "We did trials on cutting heights basically; what we could do with cutting and rolling. And going into the event that was something Chris and I discussed, taking heights down slowly going into the event and making sure we were close. We knew what we needed to do to get there, so we were close and we knew we wouldn't be fighting to get there.... Long story short it wasn't as difficult to get there just due to the fact of testing early and knowing where we had to be and in the end we got them fairly consistent , they were about 12.2. (see table next page for analysis). You can see we were anywhere from in the high 11s to over 12. You can see that mid week we were over 12 and we actually went to single cutting greens. We only at that point double cut some of the traditionally slower greens. And no rolling."

Said Ainey, "I think on the Champions Tour they don't want the green speed to be fast-fast they want the players to be able to score."

So score they did. Scott MacCarron posted a record setting 62 on Day One over the par 71 / 6,881 yard layout and then cigar-smokin' Miguel Angel Jiminez bested that flirting with 59 before settling for a near perfect 11-under par 61 in Round Three.

Another reason they may have been able to go low was the height of the fairways.

"We had a meeting at the end of advance week (the week prior to the tournament)... and we are sitting here going over things what we had to finish this and that and I asked him is there anything else...  Is there something that we can do that might just take us to the next level  to make it a little more playable? And he just shrugged his shoulders and I asked 'how about if we take fairway heights down?' He kind of smiled and said 'Yeah'.  So we went from .375" down to .350" and it was the right call to make."

Still don't think for a moment that this course was set up 'easy'.

The rough here is normally around 1.5" and the PGA TOUR was looking for it to be taken up to around 2" for the tournament. In the week leading up, they let it reach close to 2.75" and based on the weather during the tournament they decided not to cut it down.

It wasn't all easy. Ainey conceded that there were some things that did not goes as planned, "There were some ideas that were not logistically possible. There were a lot more moving parts (than we thought). We had discussed early on running tee times on both the front nine and the back nine (but) that was not going to work with us just due to timing (preparing the course each day). Staffing numbers would not allow it."

Staffing definitely was one of the major items that the PGA TOUR brought to Bear Mountain's attention. The number of people needed to prepare the course each day called for 60-65 people so Chris and Kyle were hoping for some volunteer help from other superintendents and their crews from around the province.

"We thought there be people interested in helping out but it turned out most people couldn't," said Kemball. "What we didn't take into account is that a lot of people were aerating their own golf courses at that time, so they couldn't afford to lose the bodies. We were kind of caught off guard and our numbers were around 50 people total for the last few days."

Asked what they thought was the biggest surprise for them in doing an event like this was how well the golf course was received by the players.

"It was received very well  from both the official side and from Dennis and from players with comments like 'these are some of the best fairways they played'. It was nice because I didn't expect that," said Chris.

Kyle echoed this, "For me it was some of the player comments that we heard.  We are always driving to put out a better product obviously and  some of those comments it was quite shocking actually  because we can always do a little bit better.  When you hear comments like that 'fairway so nice I don't even want to hit off of it' it makes you feel pretty good... We talked to caddies as well.  I was up on 13 and Bernhard Langer's caddie was rolling balls up there and I asked him what do you think and he just said 'beautiful'."

Nice words and if this tournament does come back to Bear Mountain next year, Bear Mountain's 'dynamic duo' do have a few tweaks in mind.

"With the wetting agents we did use we did learn quite a bit after this year,"  concluded Ainey. "We held moisture in September a lot longer than we anticipated. So they stayed wet a lot longer where we could try and dry them out a little bit more... That's what the PGA would like to see."

Also ironically they had almost too many workers available during the playoff. Said Kemball with a smile, "I needed to have couple of guys go to do a task and quite a few more than that were stepping forward, including some of the blue-shirted volunteers who were not even part of the crew."

Small details maybe but that's what can make a good golf tournament great.

Stay tuned to see if there will be a "Round Two'.