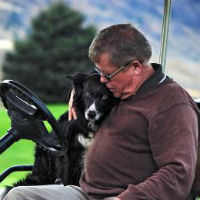 Nestled with Jim O’Connor, her owner, Birdie seems relaxed. The geese at Rivershore Golf Links are safe, if only for a moment.

The Goose Dog isn’t what she once was, riding in a golf cart alongside her best friend, Jim O’Connor.  These days, there doesn’t seem to be much point in chasing birds.  It’s pretty comfortable riding shotgun.

Birdie, O’Connor’s 14-year-old border collie, is in the twilight of her geese-chasing career.  “Birdie’s been a great companion,” said O’Connor, Rivershore Golf Links’ golf superintendent for the past 16 years.  “The first few years, she was running at least 50 per cent of the time. Now that she’s become a senior girl, she’s pretty much a rider.”

Having four-legged friends on golf courses has become commonplace. “It’s pretty much the goose poop that’s the problem,” said O’Connor, who, at 69, is planning to retire next year.  “The geese in and of themselves are a pretty neat animal, but they eat quite a bit and they digest it pretty quickly. It’s kind of messy.”

Originally from Toronto, O’Connor has been around golf courses his whole life, working in Ontario, Alberta and B.C. “It’s in the family,” he said, noting his uncle owned a course in Paris, Ont., and another uncle, a golf architect, helped design Oakdale Golf and Country Club, one of the nation’s finest private tracks.

There was some resistance to the idea of a canine at Rivershore when O’Connor first arrived. Membership and the local public weren’t sure it was a great idea. “I think I can say this now. When I first came here, some of the folks were pretty anti-dog and I was trying to figure out how I could get a dog here,” O’Connor said.

“There are lots of geese around here, so I thought, ‘Aha! We need a goose dog.’  “It didn’t take very long. Most of the folks in the subdivision and the members on the course took ownership of Birdie and they allowed her to ride along with me while I did my thing.”

Border collies are the right breed for the job, programmed to herd sheep, perfectly capable of running animals off a well-groomed fairway. “They just move the geese on,” O’Connor said.  “The dog never really hurts them. As soon as they see the dog, they take off.”

Birdie was the runt of a litter of eight, purchased 14 years ago at a ranch in Knutsford.  She’s shy, for a border collie. It’s a trait that lends itself to working at a golf course.

“I think the members worry more about her than me,” said O’Connor, easily found at the break of dawn most mornings inside the course’s maintenance cabin. “I’m just kind of here. With her getting older, people are pretty concerned that she’s getting along well. They’re always asking, ‘Where’s Birdie?’”  Birdie’s still at Rivershore.

When she leaves, there’s another member of the O’Connor family ready to take over.  “Now I’ve got a dog named Koda,” said O’Connor, the longest-tenured employee at Rivershore.  “It’s a rescue dog from the SPCA in Kamloops. She’s got a lot of lab in her, so she’s hardwired to chase birds as well.”

O’Connor hasn’t thought all that much about retirement. He plans to ski at Sun Peaks Resort and walk the dogs.  He’s not sure how his wife will handle him being around all the time at their Rivershore home.  “You’ll have to come around in a few years’ time and ask me that,” O’Connor said with a smile.

The only thing he knows for sure is life will be a little different — a little lonelier — without Birdie.  “I think anybody knows that’s had an animal that they become part of your life,” O’Connor said.  “It’s like losing someone in the family.”

reprinted with permission from KTW 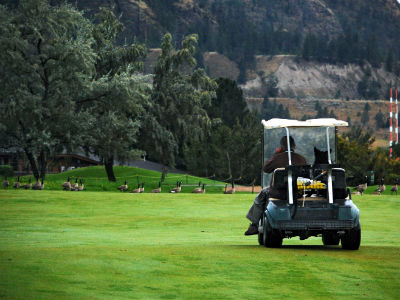