Guelph, ON – Sports Turf Association executive and members, past and present, together with staff, colleagues, family and friends gathered on October 25 to celebrate the organization’s milestone anniversary at a commemorative banquet in Guelph, Ontario.

With historical story boards providing a retrospective of the past, both founding President Michael Bladon and the Ministry of Agriculture, Food and Rural Affair’s Annette Anderson reflected on the association’s beginnings, growth and many accomplishments. Bladon challenged the STA executive “To continue our commitment and our mission to provide educational and networking opportunities for our members and the promotion of better, safer sports turf to those involved in sports field management and to the general public”.

“The STA is an organization of volunteers”, added Executive Manager Lee Huether, ‘from the visionaries of 1987 to the current Board of Directors and everyone in between, the association has grown and benefited from the dedicated service of so many”.

Paul Gillen, current President, relayed greetings from Ontario Premier Dalton McGuinty, “Since 1987, the Sports Turf Association has been making a positive difference in the lives of Ontario’s athletes providing sports turf managers with the tools they need to help maintain playable sports fields, while maximizing safety…. Take pride in knowing that the important work you do each and every day makes a real difference”. 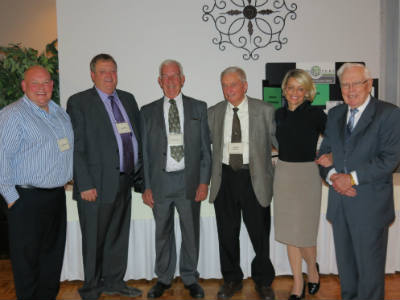 Our roots run deep and 2012 marks this quarter-century milestone. For 25 years the Sports Turf Association has been dedicated to the promotion of better, safer sports turf. That commitment continues.