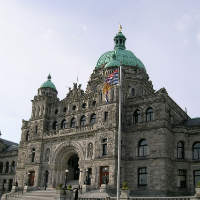 On July 24, British Columbia Environment Minister Terry Lake met with a small group of local golf industry personnel at the Radium Resort Golf Course in Radium Hot Springs to discuss concerns over the issue of ‘cosmetic’ pesticides.  While the Special Committee on Cosmetic Pesticides struck by Premier Christy Clark released a no-ban recommendation at the end of May, many golf business people remain concerned about implementation of the recommendations and cost of complying with any new regulations.

The meeting was organized by the local BC Liberal candidate for Columbia River Revelstoke, Doug Clovechok, and was the first time the Environment Minister spoke directly to the British Columbia golf industry on the matter of pesticide use.

Coincidentally, over 200 Alberta golf industry leaders were present at the Radium Resort, taking part in the Challenge Cup, a yearly event bringing golf course owners, golf professionals, general managers and superintendents together to represent their facility in a competitive team environment.  Radium Resort General Manager Wilda Schab, capitalized on the opportunity to show Minister Lake the scale and economic significance of the golf business highlighting the importance of the Alberta market to BC tourism operators.

The Minister also assured the group that golf is not seen as a ‘cosmetic’ pesticide user and that by its nature, golfers are making informed choices when participating in the game.  This is in contrast to residential pesticide use where being exposed to pesticides unknowingly is far more plausible than in the confines of a golf course setting.

Closely aligned with the Committee’s recommendations, Minister Lake stressed the importance of education and training, comparing pesticide application to trades accreditation like gas fitting, an argument the golf industry supports.  The Minister also discussed a tighter approach to pesticide sales but admitted he was skeptical of a ‘behind-the-counter’ system, himself preferring a better accreditation model.

Industry also made mention that the ‘level playing field argument’ brought forward by environmental groups does not take into consideration the destination tourism nature of many of the province’s golf facilities.  While an outright provincial pesticide ban would put all BC golf courses in the same boat, they would no longer be competitive with the Alberta and U.S. markets.  Doug Clovechok agreed, acknowledging the valuable contribution local golf courses make to the Columbia Valley economy keeping in mind the area’s reliance on the Alberta tourist traffic.