Out of the Park- 2019 BC Sports Field Training Day Smashes It!

Our biennial BC Sports Field Training Day, co-produced by WCTA and Sports Turf Canada, took place on October 2nd, definitely a little late this year, but we got away with one in terms of weather and came close to a record crowd.

The large delegation necessitated a slight change in venue plans.  Our two speakers, Jamey Serediuk from the City of Surrey and Dale Overton of Overton Environmental, ended up giving their talks twice respectively as the large number of delegates exceeded room capacity so were split into two groups and herded from the Softball City clubhouse to the Rotary Fieldhouse about a 5 minute walk away.  The good news, no one complained about getting some fresh air and a chance to stretch legs between the informative presentations! 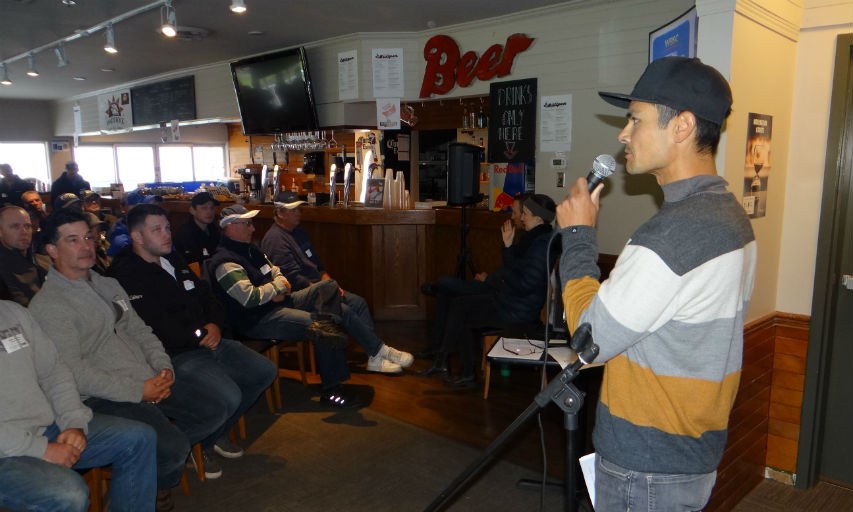 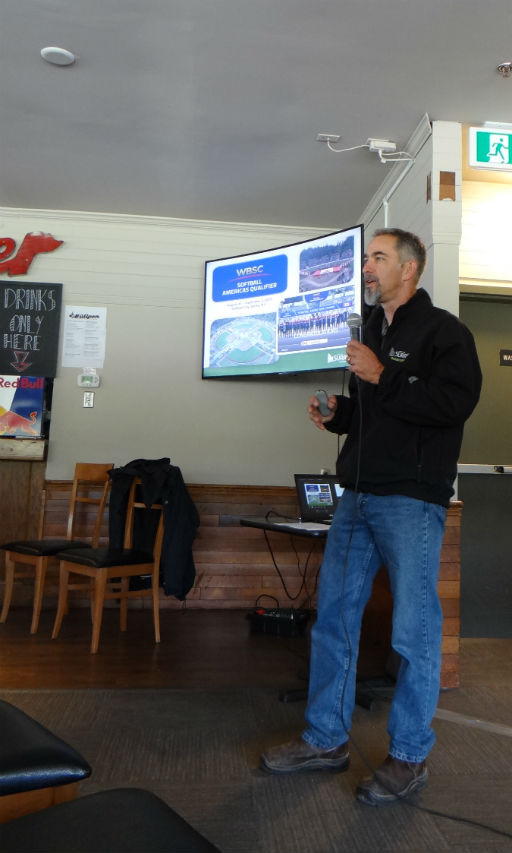 Jamey Serediuk provided an interesting history of Softball City and how the venue was prepped for the Olympic softball qualifiers. 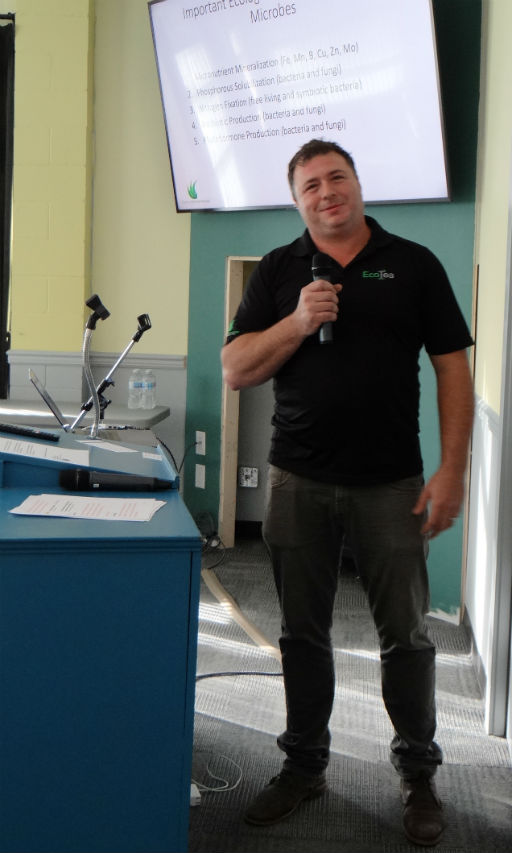 Sorry to interrupt your talk but we need you to stay still for a quick photo!  Dale Overton of Overton Environmental presents a technical talk on soil biotechnology solutions. 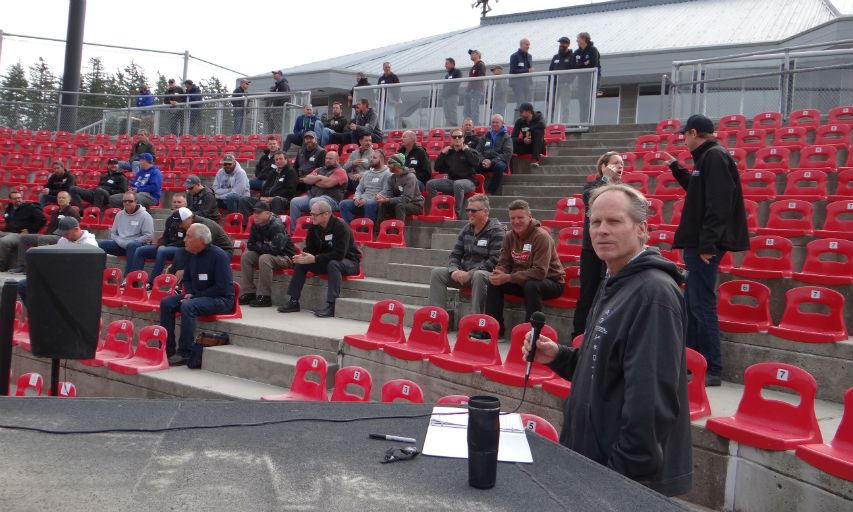 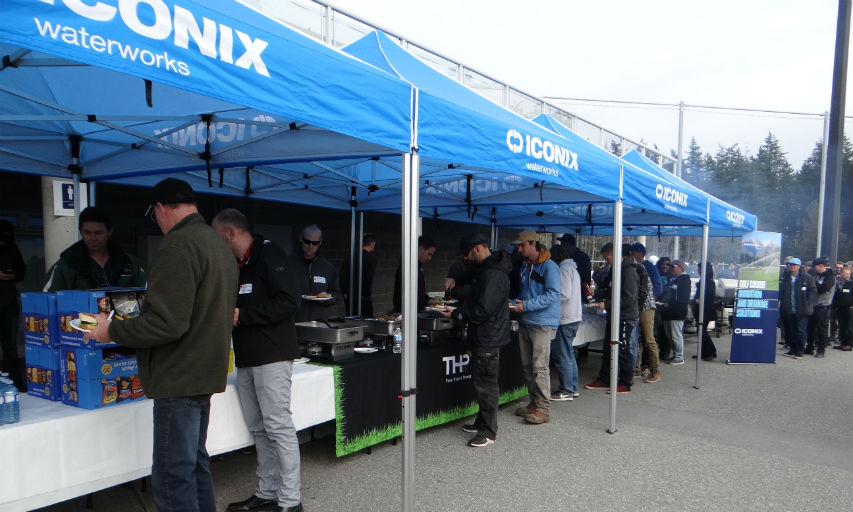 You gotta eat!  ICONIX sponsored the BBQ lunch with Kevin Neufeld and his team cooking up a delicious feast in record time!  Thanks Kevin, Dave Duncan, Peter Sorokovsky, Dena Gent and Todd Lucas for knocking it out of the park!

Lunch was followed by five afternoon demonstration stations including the supplier trade show.  The organizing committee hadn’t necessary planned it per say but the theme was definitely one of new technology and innovation never before seen by most delegates, including: 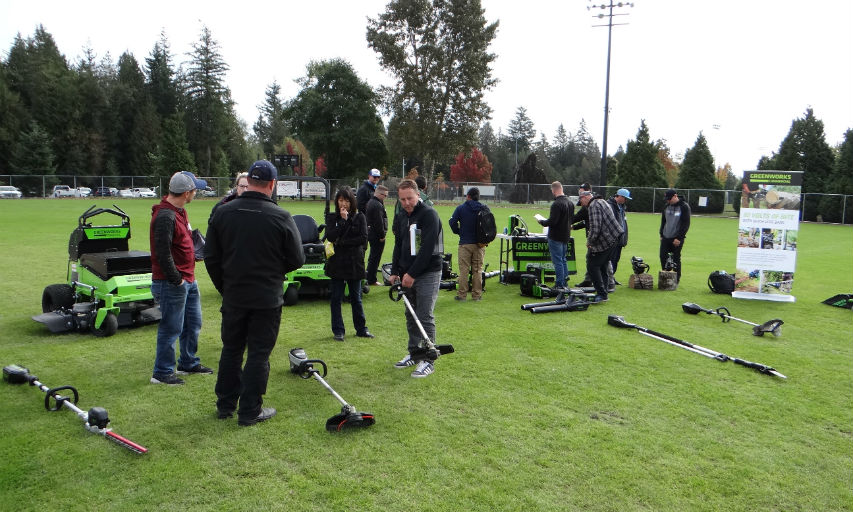 The super-popular Greenworks Commercial Products station was about as hands-on and informative as it gets! 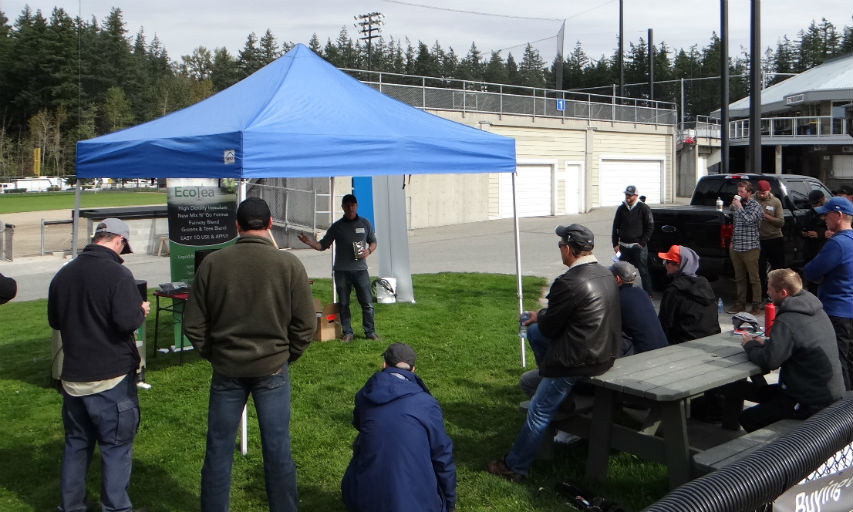 In support of Dale Overton’s talk, Jed McGeachie explains properties and benefits of EcoTea, that biotechnology solution we mentioned earlier. 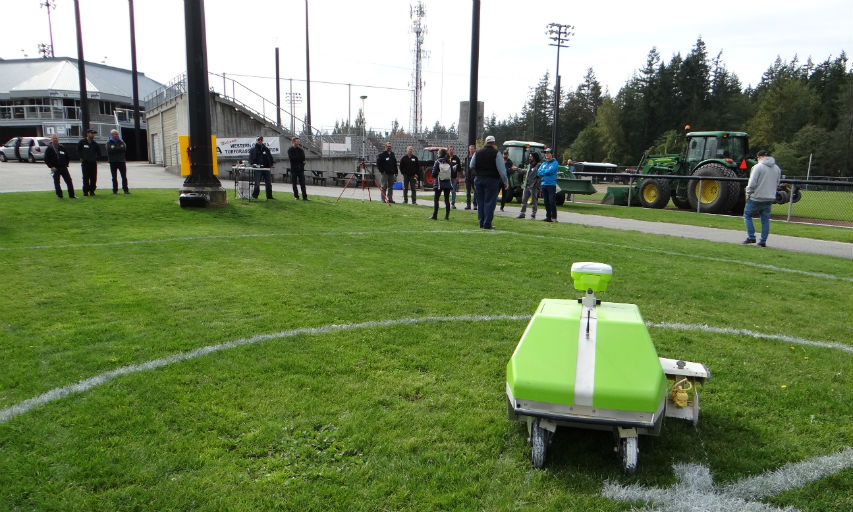 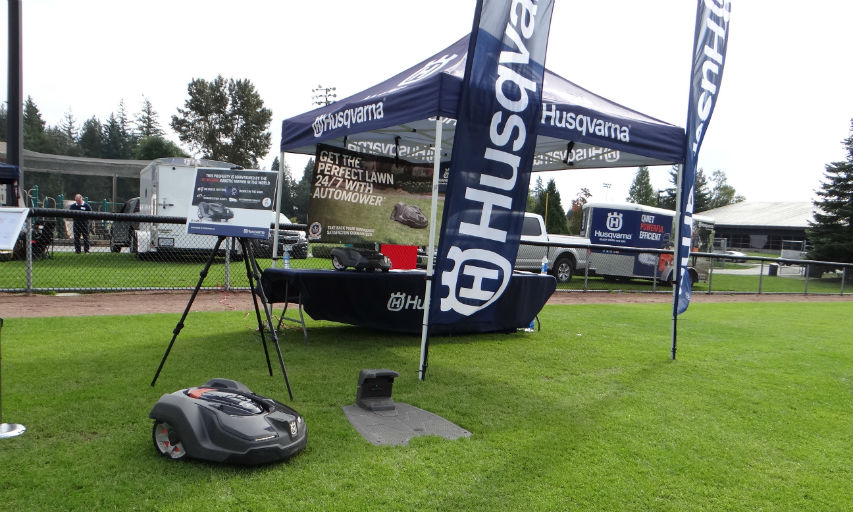 Another impressive example of new technology, the Husqvarna Automower is taking the industry by automated electric storm! 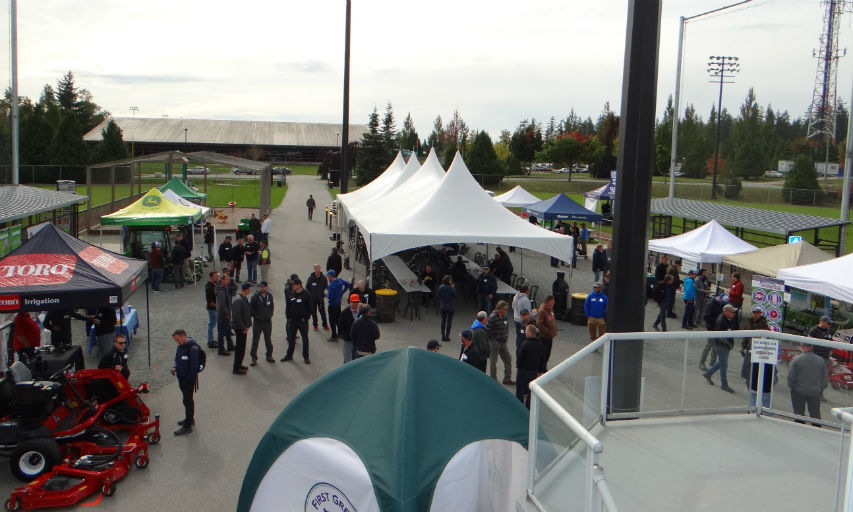 It turned out tents weren’t needed for the trade show but we weren’t taking any chances with an October event on the wet coast! 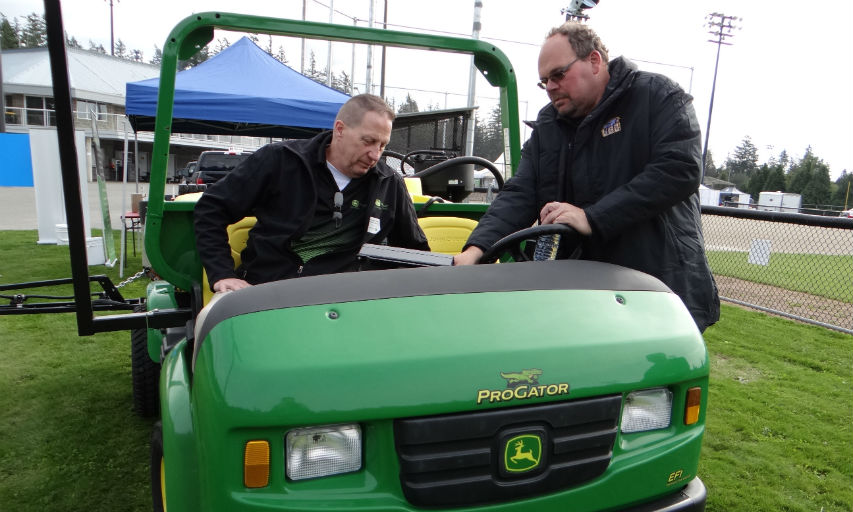 Special thanks to Prairie Coast for offering up a couple sets of wheels for the day! 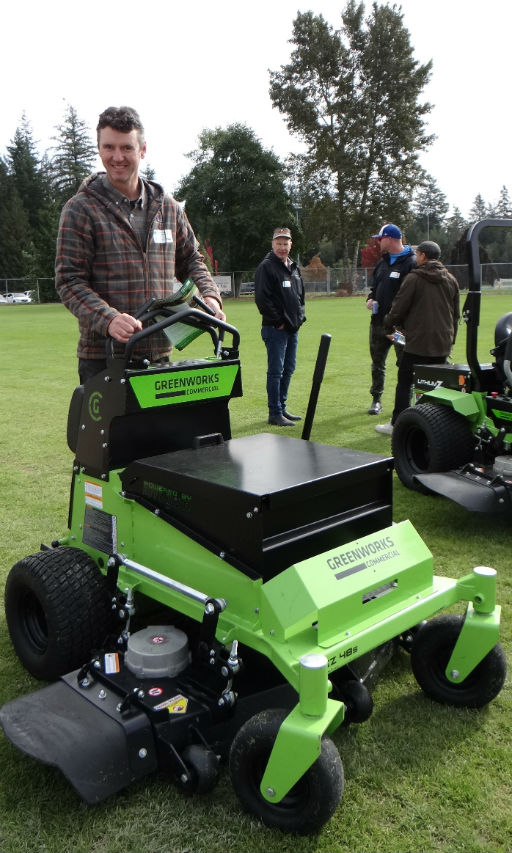 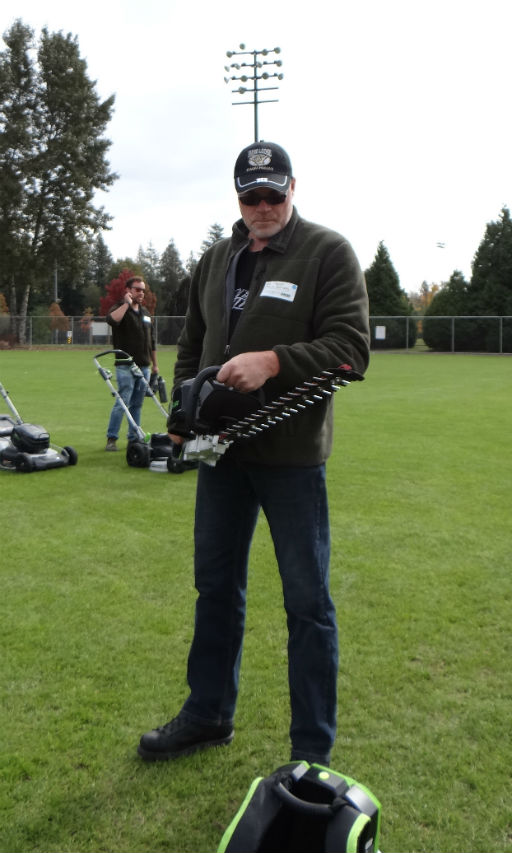 2nd favorite moment of the day (picture doesn’t do it justice).  City of Burnaby’s Don Mayes wields the electric trimmer like a pro.  Imagine a hockey mask and you might start to see the humour… 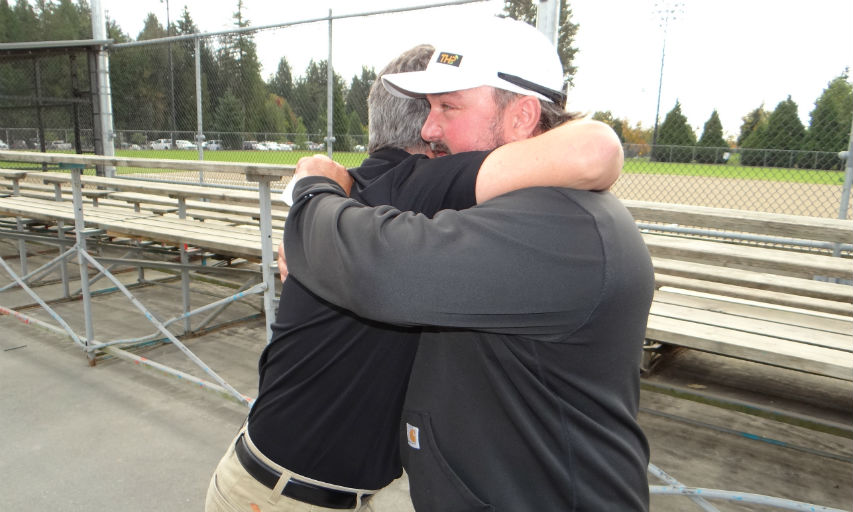 First favorite moment of the day.  That’s Kevin Neufeld and Dave Duncan and what it’s all about folks!

Thanks to City of Surrey, our speakers, volunteers, sponsors, exhibitors, ICONIX for lunch and of course all the delegates who participated!