If you didn't know it, the infield skin of a baseball or softball infield is the area where dirt is used, such as the areas around the bases, base paths, home plate, pitcher's mound and any other part of the infield not covered with grass. 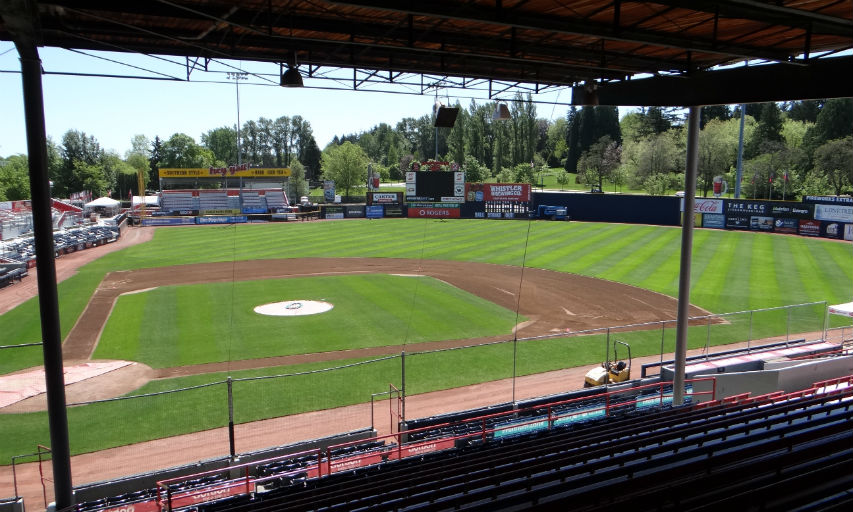 So what is this ‘dirt’ they speak of and how is it maintained?  Not too long ago and just before the 2019 season got going, I travelled to Scotiabank Field at Nat Bailey Stadium, home of the Vancouver Canadians, to observe a critical step in the process. 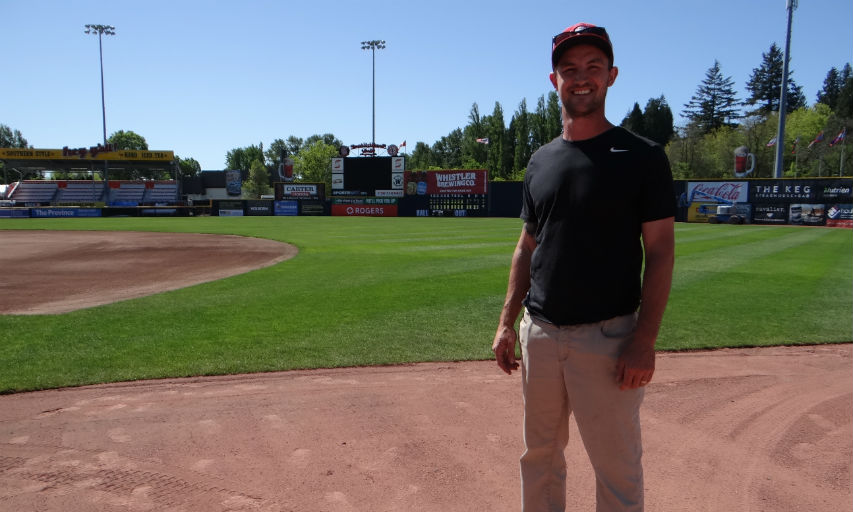 Making the decision to renovate the infield skin is Nat Bailey’s head groundskeeper, Ross Baron.  Now in his third season in Vancouver, Baron was quickly recognized by the Northwest League with field of the year awards in both 2017 and 2018, most likely due to the major projects and resulting field improvements his grounds crew pulled off in a very short timeframe.

Baron is all business.  Commenting on the endearing ‘5th inning drag’, “I know the groundskeepers dance is a staple of this organization and the fans absolutely love it but I told management my focus was the field.  The days are already 16+ hours long with plenty of other things to worry about.”  I’m trying to imagine the golf superintendent at Augusta or Pebble Beach breaking it down on the 18th green between the final groups of a major and it’s just not happening.  After the tournament was over and the greens were still alive perhaps but personally, I’d prefer a turf manager good at growing grass.

Getting back to the story, infield skins were traditionally 100% clay at one time but straight clay gets too hard when baked by the sun.  Finding the proper blend of components is crucial in creating a high performance playing surface and in the big leagues, superior mixtures with the proper sand/silt/clay ratio, or SCR, have been used since at least 2005.  There’s a lot to know about how mixes relate to infield skin performance parameters that we’re not going to mention here but a really good article can be found at “What’s in the Infield Skin?” by Stephanie Springer.

Last year, the grounds crew tried to rotovate their infield skin by hand in hopes of creating a more consistent profile.  Baron was noticing some layering and found they couldn’t keep the moisture level consistent, especially during frequent weather changes.  With inconsistent moisture came variable drying rates resulting in wide variations of the surface that negatively affected playability.  It was a noble attempt but unfortunately and somewhat expectedly, the effort didn’t get the infield where he wanted.

The solution wasn’t a big a mystery for Baron.  Known as a blecavator after the BLEC company tradename, golf greenkeepers, sportsfield groundsmen, municipalities, sod growers and landscape maintenance contractors have been using this particular type of tiller/grader for many years.  His only challenge was finding one nearby but a few calls lead to success and there we were, a few weeks before the 2019 season home opener, ready to tear up Nat Bailey’s infield.

I sensed a bit of apprehension before the tiller went to work, kind of like the first pitch of the game or for me, first tee jitters.  Professional ball fields are hallowed ground and the scrutiny for any minor mistake is substantial.  If the field didn’t turn out just right, things would not be fun for Baron and his crew. 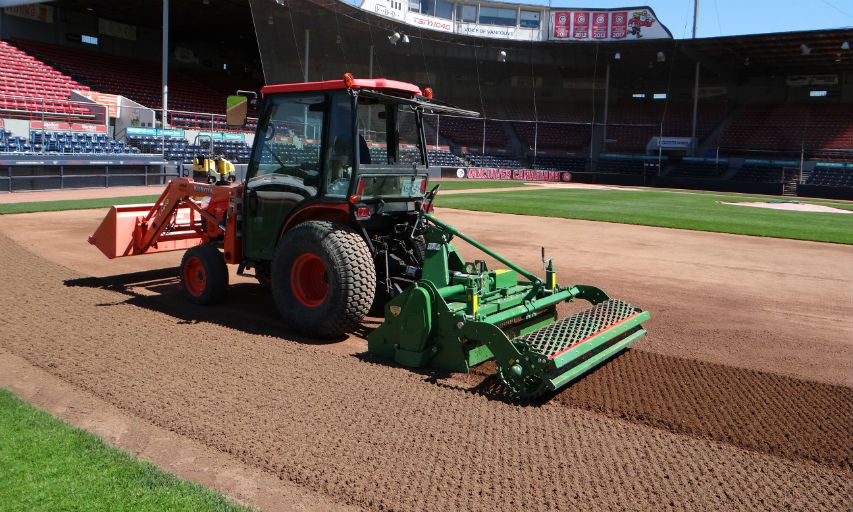 Starting at first base, the compact 35hp tractor proceeded along the outer edge of the infield arc.  A couple minor adjustments were needed to tweak the desired till depth to about 4”.  Being longer, the first several passes seemed to take forever but things got quicker as passes became shorter.  Highly compacted areas around the bases revealed themselves by the obvious machine stresses but impressively, the rotovator didn’t have much trouble breaking through the hard, layered clay. 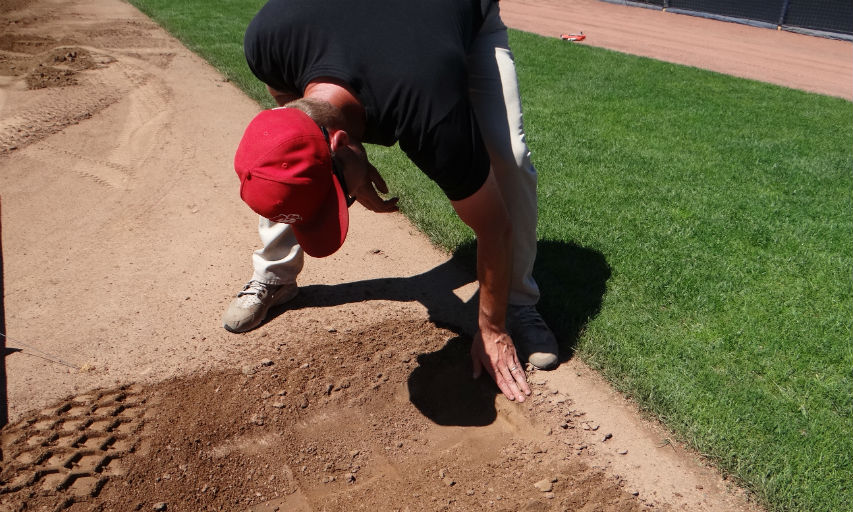 Great results.  Ross Baron checks the tiller depth along the first base line.

The job took just under 4 hours to complete.  Following a constant curve wasn’t ideal for the tiller but the shallow arc minimized any significant equipment stress.  Although straight, baselines were extremely compacted and required a little slower going however the finish was as nice as the rest of the infield.

“I’m very happy with the results and would recommend this procedure for any field,” Baron stated.  While in a good mood, I was able to confirm Ross Baron as a 2020 WCTA Conference speaker on the subject of infield skin maintenance:). 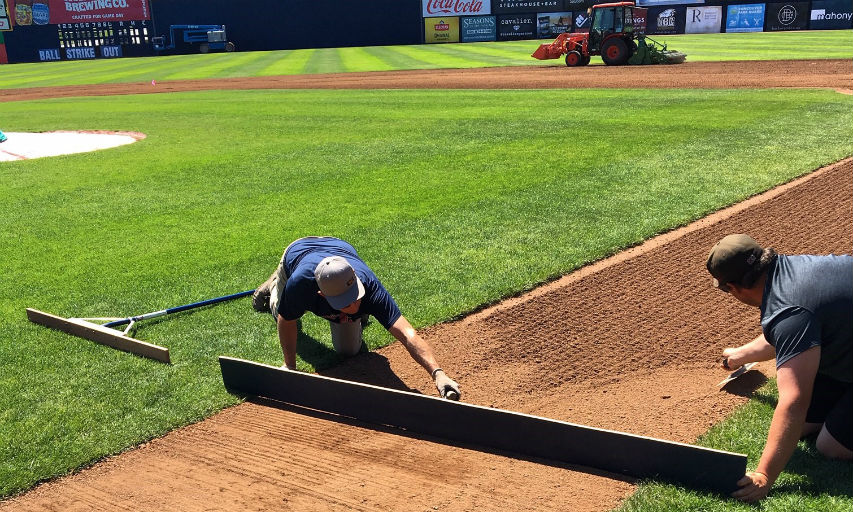 Attention to detail.  The Nat Bailey crew trowels and screeds the first baseline to perfect level after rotovation. 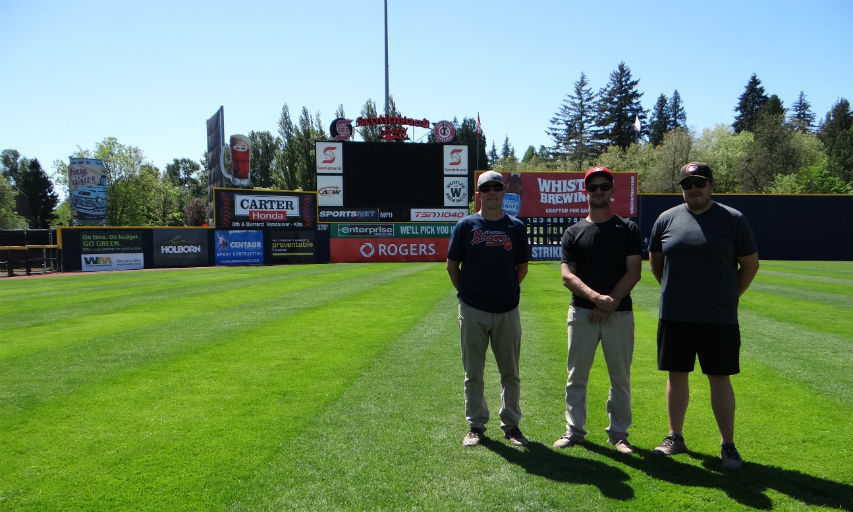