From previous conversations, I knew the City of Burnaby, under Peter’s guidance, was trying a few different control methods for this turf disease that can crop up at any time of year if conditions are favourable.  I also wanted to ask Peter if he thought the golf industry and WCTA should be putting more efforts toward finding solutions to what was indicated in a 2010 survey of golf course superintendents from across the province as BC’s #1 turf disease.

Fungicide trials for pink snow mold control took place at Oregon State University during the winter of 2011/2012 under previous Turf Management Professor Rob Golembiewski and Research Assistant, Brian McDonald.  Another project looking at alternative management/control methods was slated to start in 2012 but had to be put on hold with Rob G-11’s departure.  It is now underway courtesy his replacement, Dr. Alec Kowalewski (K-9?) and grad student Clint Mattox with help from ever-present Brian Macdonald and a WCTA $15,000 USD grant.

Both Alec and Rob spoke at the 2012 WCTA conference in Victoria; they also have a common interest in researching new ways to help control the devastating low temperature turf disease.   With the public, government and industry trending toward synthetic pesticide reduction in various Canadian regions, golf course superintendents like Peter Sorokovsky and Jason Haines of Pender Harbour, are keen to minimize traditional treatments in favour of other practices such as lightweight and frequent rolling and/or the use of mineral oil/elemental sulphur mixtures.

Within a week of the NTA conference, the WCTA proposed a meeting take place between interested groups on both sides of the border to provide an update on the latest research being performed, assess our present success in managing the disease and to explore ideas, thoughts and options on how to minimize Microdochium issues in the future.  The following bullets were offered to help steer the conversation:

The  two and a half hour teleconference that ensued, attended by WCTA representatives along with those from the Northwest Turf Association, USGA and OSU (GCSAA was invited but couldn’t make it) was informative and productive.  Lead by grad student Clint Mattox, a 48 page powerpoint summarizing OSU’s current and previous research was presented including some promising results from current trials, for example, quantification of the positive effects of light and frequent rolling.   The report also included some myth busting as well, ie. the futility in dew removal.  OSU’s interim project report titled Alternative Control Methods of Microdochium Patch, can be found at the following link: http://wcta-online.com/turfgrass-research/item/818-alternative-control-methods-of-microdochium-patch-interim-research-update 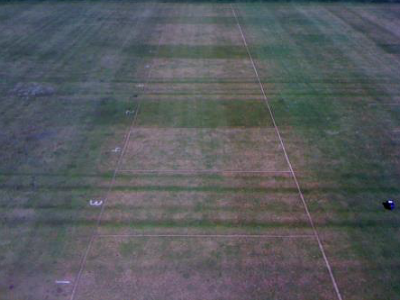 Value of this particular research was also discussed including an attempt to quantify the negative economic impact (of pink snow mold) to the golf industry.  OSU’s initial rough estimate based on fungicide applications made to greens every 3 to 4 weeks during a 9 month period of disease activity guesstimated that $20,000 is spent per 18 hole golf course each year.  Even if the actual average is half that, multiplying by the number of golf courses in the Pacific Northwest and British Columbia quickly puts the problem into the ‘millions of dollars every year’ category.

No thorough conversation about turf research is complete without looking at funding options and several thoughts were brought forward including soliciting funds from the USGA and GCSAA along with other regional golf industry groups.  An action item was created to investigate government funding availability and to ascertain the potential for contributions from certain suppliers, ie. those who manufacture lightweight rollers, mineral oil or elemental sulphur.   Way outside the box ideas included approaching land use/improvement organizations such as the BC Real Estate Council and their American counterparts and environmental groups like CAPE or the Canadian Cancer Society.   It takes money to make money however,  and lobbying for significant turf research funding requires significant initial investment.

Current OSU research is scheduled to continue for another two years but like any trial based research, it really is just throwing ideas against the wall ‘to see what sticks’.  WCTA Research Committee member and Plant Pathologist Elizabeth Hudgins asked if any pathology work was being done to pre-screen potential solutions in the lab much like the Institute for Sustainable Horticulture in Langley is doing in an effort to combat the European Chafer problem now widespread throughout the lower mainland.  Unfortunately, the answer was ‘no’ to what was termed as basic scientific work, highly needed but typically expensive and not overly attractive to contributors.

The group yet to be named has committed to further collaborative discussions and has tentative plans to meet in March of 2014.  Anyone wishing to add to the conversation can certainly put in their 2 cents by contacting Peter Sorokovsky, WCTA Research Chair at peter.sorokovsky@burnaby.ca although a slightly larger financial contribution would be highly appreciated!