The State of the Game

One of the highlights from the 2012 Western Canada Turfgrass Association (WCTA) conference and tradeshow was the State of the Game Symposium that was held on the final day. By Rick Munro

The discussion that was created amongst the panel along with audience participation demonstrated a great desire for the industry to work together to come up with solutions to the many problems facing the golf industry; most notably declining player participation.

Going into the symposium I fully understood that the problems of the industry could not be resolved in the allotted 2 hours, I only wondered if a united front could be consolidated. There is little doubt in my mind today that this is possible and certainly necessary.

Although many felt that the symposium accomplished little, it indicated that a discussion regarding the state of the game is not only possible but amicable with all parties agreeing that something must be done on a united front in order to save the golf industry from future demise.

When approached about the fact that no resolution had come from the symposium Rousseau stated, “if anyone was expecting all the answers to their problems in a 2 hour panel discussion then I fear the industry may be worse off than I thought.”

Moderator, Doug Ferne had a lengthy list of topics to be discussed which included everything from economic to environmental concerns. With each member of the panel chiming in on different topics and tremendous audience participation, Ferne was unable to touch on all his points, in fact he barely scratched the surface. 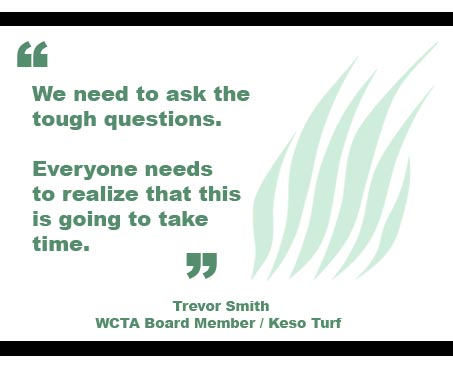 To me this indicated a need for a full 3 day symposium where the panel could work together to come up with ideas and answers to help the industry move forward. As Trevor Smith from Keso Turf aptly stated, “we need to ask the tough questions. Everyone needs to realize that this is going to take time.”

If the game of golf is going to thrive in the future, events such as the symposium must be done now to change the direction the industry is moving. Rousseau added, “the symposium idea came from a couple different places including Trevor Smith, who attended the 2011 Summit on Affordable Golf and felt something held here in BC with local golf leaders involved would be timely and beneficial.   The Washington Golf Alliance Summit definitely influenced the desire to create a forum where all sectors of golf industry personnel could sit in the same room at the same table to discuss issues that affect everyone.”

The symposium was by all accounts successful as it demonstrated not only a need and willingness for discussion but most importantly it was a starting point. Ferne was correct when he regarded the symposium as a process and that there would be no hard and fast answers.

As a member of the audience I was impressed with the idea of working together but would like to see a more varied panel. While all panel members were certainly well respected in their areas of expertise I thought there was some duplication that could have allowed for more diverse conversation. For instance there were 3 panel members representing superintendents and two representing developers.

Moving forward I believe there is one group that was not represented on the panel. Golf course builders and shapers have a significant stake in the business of golf development and should be represented at any discussion on the future of the industry.

While Ferne did an excellent job moderating the discussion I felt that his participation on the panel would have better allowed for his valued input. The other omission from the panel was Jerry Rousseau whose opinions and thoughts about the future of the game are of tremendous value.

In the final analysis, the State Of The Game Symposium was an excellent starting point that will only show its worth if the discussion continues and the “tough questions are asked.”