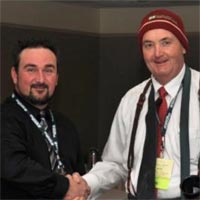 By Jerry Rousseau - One of the primary mandates of the Western Canada Turfgrass Association is to foster turfgrass research for the betterment of the entire sports turf and golf course industry.
10% of WCTA member dues go directly into turf research along with 30% of any net operational profit at year end. Donations are received from individual members and facilities along with allied groups like Irrigation BC, BC Golf Superintendents Association and the National Golf Course Owner’s Association.

On behalf of the 750+ members of the Western Canada Turfgrass Association, we would like to acknowledge and thank all those who participated in our 14th Annual Silent Auction that took place at the 2012 Conference and Trade show in Victoria.

We appreciate your support of the research that supports the Turfgrass Industry - total amount raised was $7,385! Special thanks to our donors, without whom this event would not be possible.

We would also like to recognize the efforts of one of our Life Members, Syd Pickerell, who does a tremendous amount of behind the scenes work to ensure the Silent Auction runs smoothly and successfully – thanks Syd! (Syd, right of photo, serves another happy customer) In other funding news, our annual 50/50 draw for Turf Research, held during the Fest-of-Ale at the trade show brought in $1271.92. 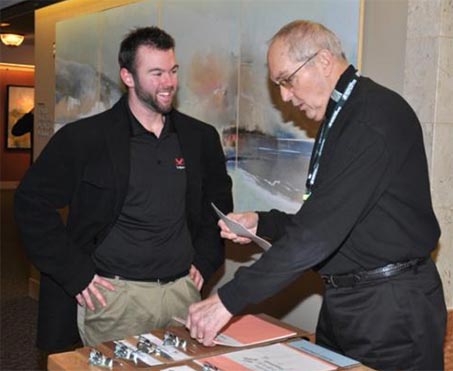 Apparently, the universe was aware of outgoing Past President Dave Duncan’s decade plus outstanding dedication and service to the Association and offered its reward by having him pull his own name out of the draw box. No fix here, it was all legitimate and true to form, Dave donated half of his share back to Turf Research.  Dave (left of photo) presents pre-conference speaker Bob Oppold a small token of appreciation from the WCTA. 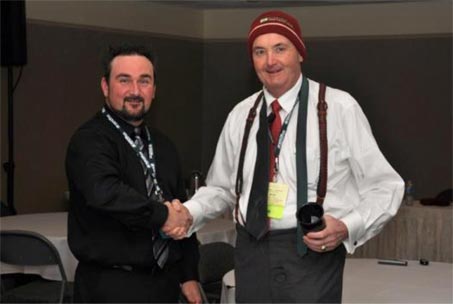 All sorts of efforts are made every year to raise funds for our research program, not unlike fund raising activities of many other groups.

The Kwantlen Polytechnic University Turf Club students have become a major source of assistance in the last few years and for 2012, they decided to take on the role of organizing the conference golf tournament.

Unfortunately, weather did not cooperate and the tournament was cancelled but amazingly, an alternative plan was put in place on short notice and many of the would be golf tourney participants took part in a fun afternoon of darts, pool, prizes and camaraderie. When the dust settled, approximately another $800 was raised for research. 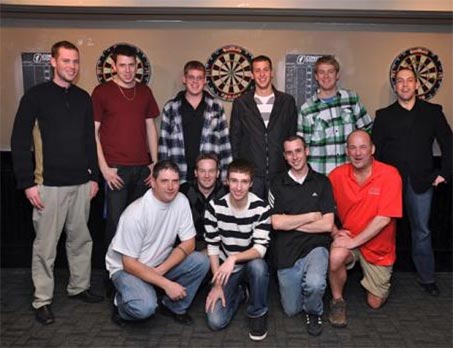 We would also like to take this opportunity to thank our overall contributors to turf research. No draws, auctions or prizes here, these groups make ongoing efforts to help raise funds for turf research as part of their mandate to support the turf industry.

Current Priorities
The following is an excerpt from the WCTA ‘Call for Research Proposals’ listing our 7 highest priority project types that we are willing to fund followed by questions asked of the researchers which help guide our committee in selecting funding recipients. Nutrient and fertility management, best management practices Soil and root-zone management, best management practices Evaluation of alternatives to pesticides Irrigation and water use issues (water quality and reducing water usage) Investigations into the biology, ecology and management of current and emerging pests Alternative cultivar and species for new turf construction, integration and conversion into existing turf areas Species/cultivar evaluation and improved management practices for areas of heavy traffic and wear tolerance.