Bees in the Trees at Colwood Golf Club

posted Jul 9, 2014 at 7:00 AM
reprinted with permission from the Goldstream Gazette

In a rather wild area a mere duck-hooked drive away from the 17th tee at Royal Colwood Golf Club, Barry Denluck pulls a bee-filled panel out of one of five hives he recently set up there.

Before pointing out the queen for the visitors, the beekeeper and breeder mutters, “I shouldn’t really be doing this.”

“That’ll probably set them back about two or three days,” Denluck says of the show-and-tell session. He notes that honeybees need to be left mostly undisturbed to produce honey.

“We won’t see any honey of significance until next year,” he says.

The beehive project is a joint venture between Denluck, who is field testing his new design of a coastal weather-sensitive hive, and the golf club.

The project emerged from a professional encounter last year between club general manager Philip Nurse, who had a major bee swarm to deal with on the course, and Denluck, the View Royal-based expert called in to take care of it.

The experience got Nurse thinking about creating a place for bees to gather on the course.

“We looked at it from an environmental standpoint,” he says. The combination of having bees around to pollinate flowers and trees on the 160-acre course, and doing their part to help stem the annual winter die-off of bees in the area, was attractive to club members, Nurse adds.

“I wanted to put them somewhere where they’d be visible to members, otherwise it’s out of sight, out of mind,” he says.

The hives developed by Denluck, an executive with the B.C. Honey Producers Association, are designed to attack the issue of bee loss head on.

“(It) is designed to accommodate for the changes in temperature and humidity,” he says. “Winter loss is way too high. It’s been as high as 40 per cent among our members in Victoria and as high as 60 per cent across the Island. Sustainability requires somewhere around 10 per cent (loss).”

The plan for the hives is to monitor them this season and through the winter and create beehive towers to increase the number of bees and their production as the years go by.

Honeybees, or Apis mellifera as they are scientifically known, are the only strain of bees that do not hibernate, Denluck says. The goal is to breed bees, particularly queens, that have developed a tolerance to changes in temperature.

Currently beekeepers on the Island are getting about three years out of queens, but with a specialized apiary, they may be able to live even longer, Denluck says.

The existing hives have about 5,000 bees each in them. At the project’s peak, he expects there to be in the neighbourhood of one million bees in total.

As for the honey, the objective is to produce about 1,000 pounds per year, with roughly one quarter of that going to the golf club for use in the restaurant and for sales in the pro shop.

Nurse is excited about the potential for the bee operation and says club members are as well.

“It’s interesting, when you start talking about it, everybody’s eyes light up,” he says.

The gazebo covering the hives will eventually be painted with the Royal Colwood Golf Club colours to blend in with its surroundings. 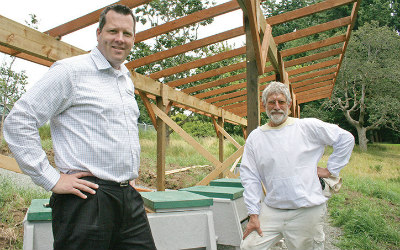