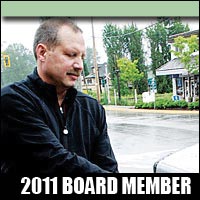 Personal Biography
I was born in Seattle Washington but raised in Langley B.C. I began my horticulture career working the summers for the Township of Langley Parks Department while attending high school and university.

1988 was a big year for me; I graduated from the University of Victoria, got married to my wife Christine and started my tenure with the Langley School District Grounds Department.

In the late 90’s I decided if I wanted to expand my career horizon I would need a formal education in horticulture. So I enrolled at Kwantlen University College on both part-time and full-time basis until I graduated in 2002 with a diploma in Horticulture-Turfgrass Management.

In the spring of 2006 I returned to the Township of Langley. I accepted an exempt position in the Engineering Division – Operations Roads and Drainage Department as a Roads Supervisor. You are now probably wondering how does a Roads Supervisor have anything to do with horticulture? I manage the Township’s greenways and boulevards, which includes; landscaping, turf management, arboriculture, irrigation, sidewalks, street sweeping and the cleanliness of the community.

In the spring of 2008 I was promoted from the Township Engineering Division to the Recreation, Culture and Parks Division as the Manager of Parks Operations and Cemetery Services.

I am pleased to be able to serve the WCTA membership as vice president. I look forward to working with the board and help direct this organization towards a bright future.