On behalf of the WCTA Board and staff, we appreciate your continued involvement and confidence in our efforts to support turf management professionals in western Canada.  This summary report reflects association accomplishments and industry activities over the course of the past 12 months or so, and the impact of the ongoing coronavirus pandemic on our membership and the association itself.

We certainly did not expect the year to unfold the same way as 2020 yet here we are, and as of November 2021, things have not yet returned to normal.  Just getting to this point hasn’t been simple or easy with a good part of our collective destiny out of our control throughout these many months.

All that said, we’re dealing with a new normal and things in the WCTA world are starting to move forward.  For example, we helped host our first in-person event since February 2020 on October 8th, the Pat Dooley Memorial Golf Tournament at Mayfair Lakes in Richmond (more on that in a minute).  In addition, our committee and staff are very busy putting together plans for a live and in-person conference and trade show to be held February 16-18, 2022, all under one roof at the Penticton Lakeside Resort.

As sometimes happens, I am getting ahead of myself and we better take a quick look back to this time last year…

In November 2020, the WCTA Board had not yet completely abandoned the idea of an in-person conference although it had been officially cancelled a couple months prior.  While the new WOW webinar series had started, a completely virtual conference was still an unfamiliar and intimidating undertaking with pretty much zero production experience to draw from.

I spent several weeks reviewing different online conferencing platforms and after a ton of discussion and option weighing, on December 18, 2020 the Board announced an entirely new virtual initiative, the WCTA Online Trade Show & Unprecedented Presentations, or ‘WOTS-UP!’ 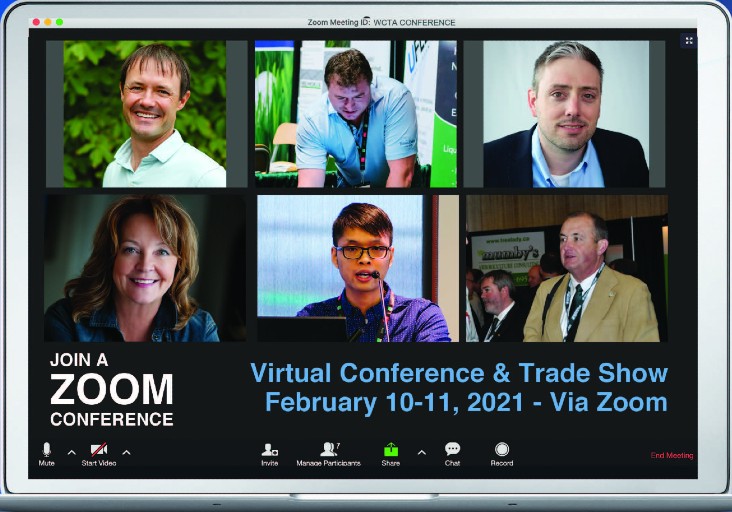 WOTS-UP! was built around and greatly expanded upon the originally scheduled Feb 11 WOW series webinar and was designed to include multiple ‘hardcore education’ speakers as President Travis Olson put it.  One, 30 minute feature product information session and six, 10 minute sponsored presentations were included in the program each day along with ongoing turf management industry supplier/service provider breakout rooms available for participants to visit anytime throughout each morning.  This was basically the trade show portion of the event and like our trade show typically does, it sold out!

When the dust settled, 187 delegates, 64 supplier personnel and 7 speakers participated in WOTS-UP for a total attendance of 258 people including 94 WCTA members attending the AGM.  Financially, the virtual show didn’t come close to a live show however we netted about $10k which went a long way to reducing losses for the year. 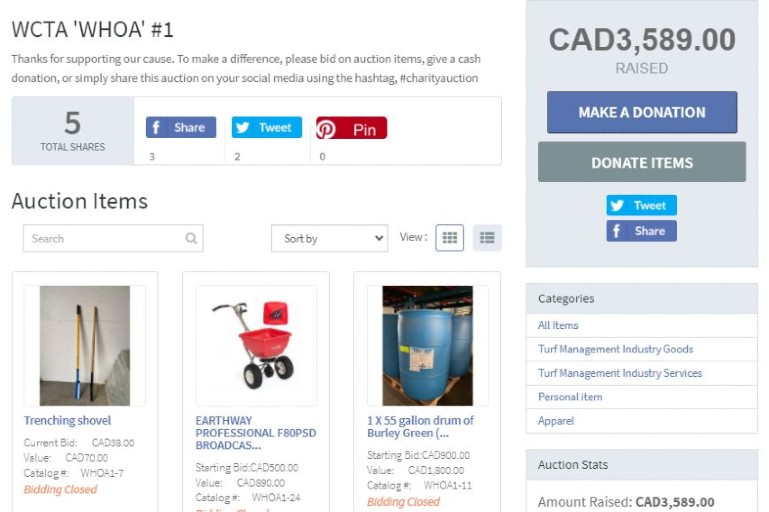 WHOA or the WCTA Hub for Online Auctions, also took place during the virtual show, replacing our annul Silent Auction and raising $5387 for turf research. Again, not what a live show does but a very significant amount of money supporting research during a very difficult time to fundraise.  We really appreciate all our supplier donations but I’m sure several years from now, we’ll look back and wonder what we were thinking with all the acronyms..

After the show, Leslie and I unexpectedly found ourselves immersed in CEC attendance verification with so many online education opportunities over the late winter months. 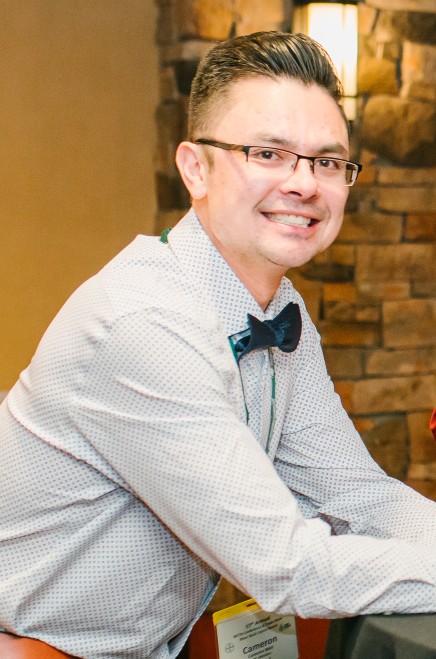 Around the same time, Cam Watt, our new President, announced his departure from the industry which felt like a first pitch knuckleball to the new Board but without missing a beat, Gary Bartley from UBC Athletics took on the role with Stu Carmichael from the City of Courtenay bumped up to Vice President.  On behalf of the entire membership, we thank Cam for his volunteer efforts over the years and wish him the best of success in his new career.

Although we got off to a bit of a rough start, losing our President and all, things stabilized and the entire Board rose to the task with a very consistent and thoughtful style to leadership enabling us to be ready for the next set of challenges. 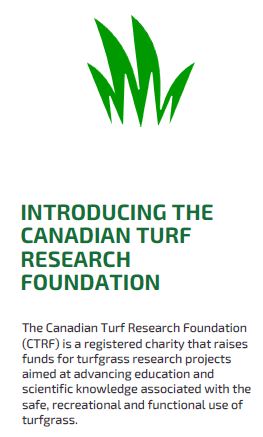 Throughout early spring, our administration contract with the Canadian Turf Research Foundation saw some extra attention with a focus on fundraising.  A lot of WCTA members may not know we also run the CTRF, a nationally registered charity that aims to fund turf research projects.  For the first time in its history, we began the slow process of community grant applications and created an information brochure designed to reach about 100 turf related amateur sport and industry organizations across Canada.  The first problem was sourcing all that contact info! 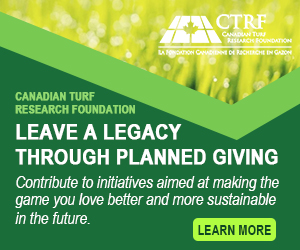 More recently, we’ve been working on a legacy giving initiative directed toward golfers that will hopefully launch next spring.

By early summer, the mindset of Board and staff was that we would be returning to normal and our focus was concurrent production of the 2021 Member Directory, May/June Turf Line News and two e-newsletters.  We started planning another WOW series, not because we thought virtual was the only way to go, rather it was so successful that the Board felt we needed to permanently add a webinar series to our member education offerings especially for facilities with smaller budgets and those who were ‘geographically challenged’. 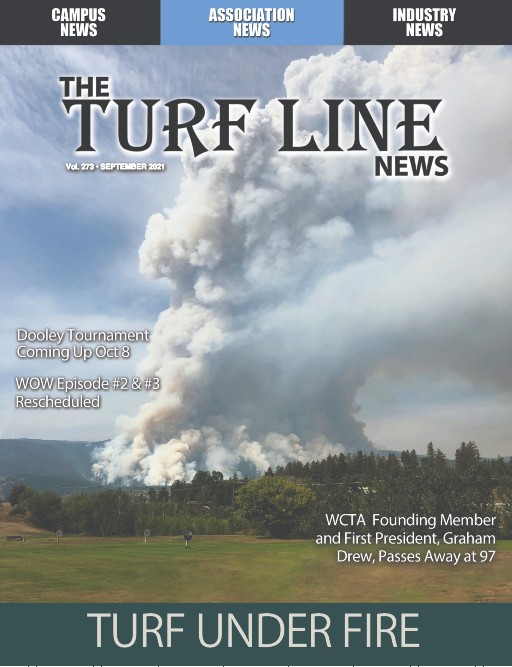 It turned out the summer, for many of us, wasn’t anything close to normal.  A heat dome enveloped much of western Canada with incredibly high temperatures, a new record of 49.6C set in Lytton, BC just before it burned to the ground and there were hundreds more serious wildfires to follow.

Turf managers tend to be pretty busy in-season so while our phone/email workload as it its lowest, we get going on planning and production of various events including the Dooley Tournament, WOW series episode #1 that took place on July 22nd, Turf Line News and the annual conference and trade show.

Our Board meeting schedule breaks over the summer but resumes early September.  By then, cooler and wetter weather was helping the wildfire situation and it started to feel like the season was winding down.

Nothing slows down the regulatory process and on September 1, a bevy of new WorksafeBC regulations came into force, many effecting the turf management industry including:

September 30th is our fiscal year-end, a time of transition and wrapping up one period and moving onto the next.  At this time, we get a pretty good picture of where things stand in terms of membership attrition, retention and overall financial performance of the association.  I’m very pleased to report another strong year with 696 current members and a record year for dues revenue.  Timing could not be better as the expected loss without the usual conference revenue was significantly reduced by better than expected dues performance. 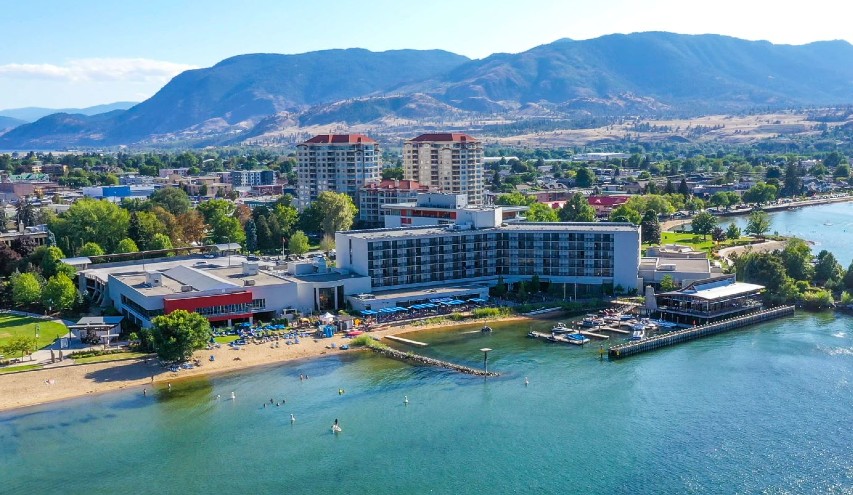 Speaking of conferences, we’re back to where this report started but before breaking into that conversation, I want to thank all the Pat Dooley Tournament volunteers and head organizer, Stan Kazymerchyk for putting together an excellent event on October 8 at Mayfair Lakes Golf Course in Richmond.  This was our first in-person function since February 2020 at the River Rock and you could see pure joy in all the smiling faces.  Fall coastal weather was perfect for about 100 participants who enjoyed great golf, games and prizes - when the dust settled, $7,700 was raised for student awards and turf research!

The organizing committee and staff are very busy planning a world-class program of education and social functions for our 59th Annual WCTA Conference and Trade Show.  As announced, we’re going live Feb 16-18, 2022 all under one roof at the Penticton Lakeside Resort.  With extensive new construction and renovations, the hotel has added luxurious new rooms and replaced their casino with a stunning banquet hall overlooking Okanagan Lake.

We couldn’t ask for a better venue and I look forward to seeing everyone in Penticton this February so we can catch-up in person.  Thanks to all WCTA members for your unwavering support over the past couple years!

Housekeeping
• If you missed submitting 2021 dues, please give Leslie a call at (604) 372-3530.
• 2022 dues invoices will be emailed mid-November, please take care of these as soon as you can.  Less admin = better member services.  If you have any contact information changes, let us know.