Fraise Mowing Coming to a Field Near You

During our 2017 field day hosted by Tab Buckner and the Township of Langley, Ross Rivers Enterprises provided a brief fraise mowing demonstration.  As far as I knew, it was the first time most of us in attendance were seeing this seriously destructive but impressive cultural practice in person.  I’d describe it as coordinated sod removal by force without the need to pick-up those annoying rolls. 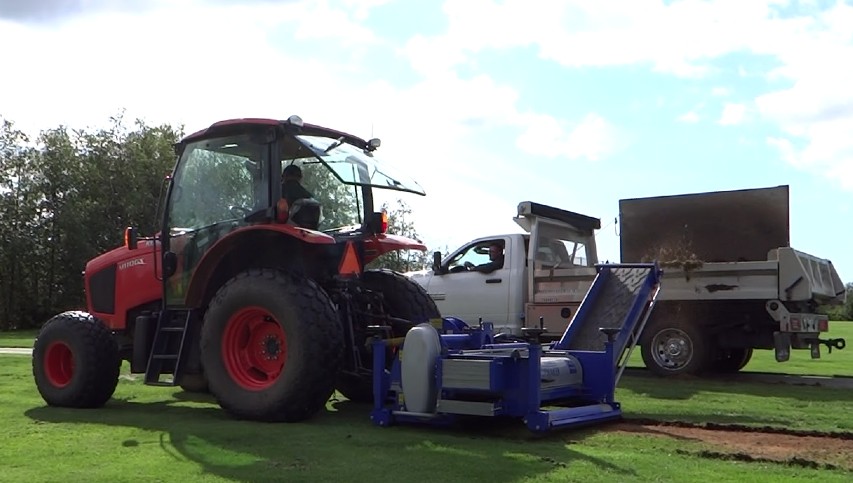 Around the same time, articles were popping up in various industry publications along with social media chatter that gave me the impression fraise mowing was more widely known and popular than I first thought.  We even had Kevin White, then from Seattle University and now at Portland University, do a great fraise mowing talk at our 2015 Victoria conference and BCPRA just had Ross Rivers present at their 2021 virtual conference on the subject.

Yet fraise mowing hasn’t seemed to catch on, at least around these parts.  Perhaps too aggressive, intensive or just another one of those exotic European techniques that we hear about but don’t get too excited over.

Whatever the case, when Mike DeCicco, Turf Crew Leader for the City of Kamloops, invited me to see the first test-run of their newest equipment addition, the Redexim Turf-Stripper 2000 fraise mower which according to their website, “removes turf, weeds and thatch from sports fields quickly and accurately,” I asked him what time and what field.

Upon arrival at McArthur Island Park earlier this spring, a massive sports complex located in downtown Kamloops on an island in the Thompson River, I realized I made a rookie mistake.  Not anything to do with COVID, all precautions were in place, but being a municipal setting, I forgot to bring my high-vis vest!

Nevertheless, the trial got underway just after 8:00am on ‘Soccer Field #2’, one of the busiest in Kamloops, which BTW, has the moniker ‘Tournament Capital of Canada’.  With all the newness and related excitement, it took some trial and error getting the desired settings and speed right plus the pick-up vehicles needed to coordinate their timing and spacing with the tractor in order to collect a massive amount of debris.  Fortunately Mark McMaster from AR Mower was on-hand to assist with the details and it wasn’t long before the turf crew had figured out the process. 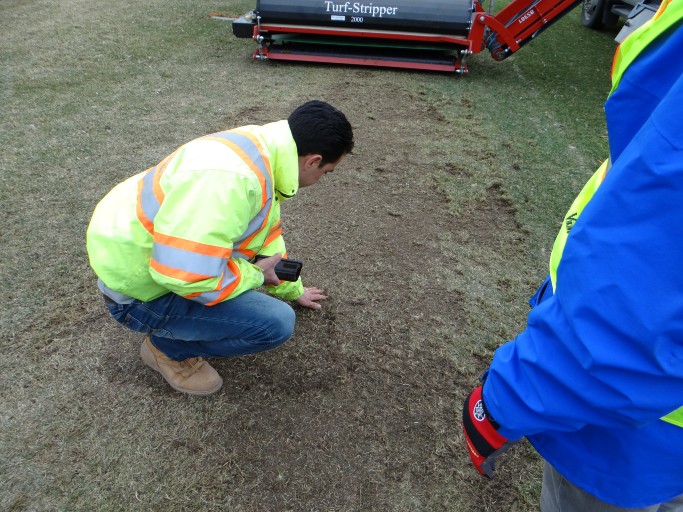 Mike was extremely happy with the results and quite proud of his new purchase.  He forecasted that with overseeding, a fertilizer app and decent weather, the field would fully recover in about four to six weeks, well ahead of pending play.  My guess is that the new machine will be put to good use on many more City of Kamloops fields! 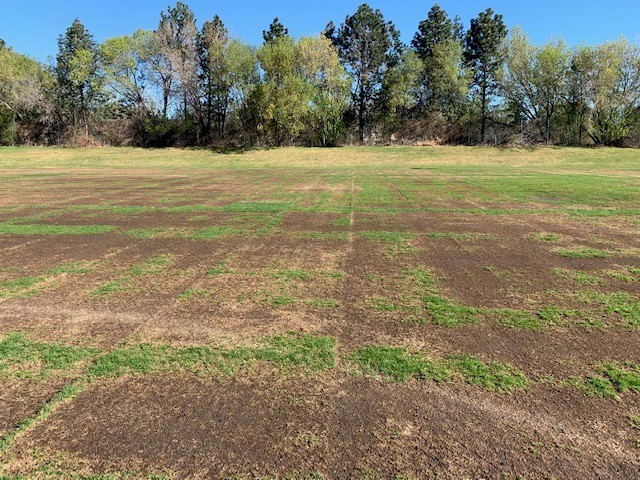 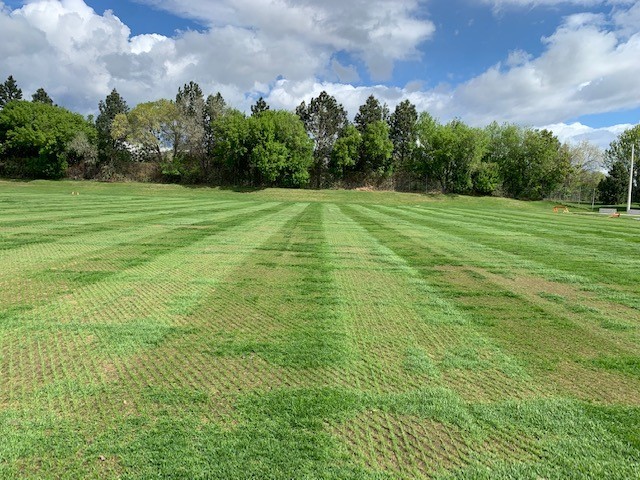 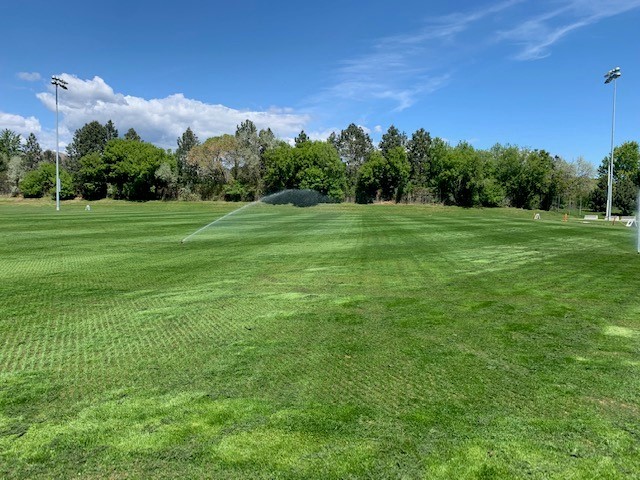 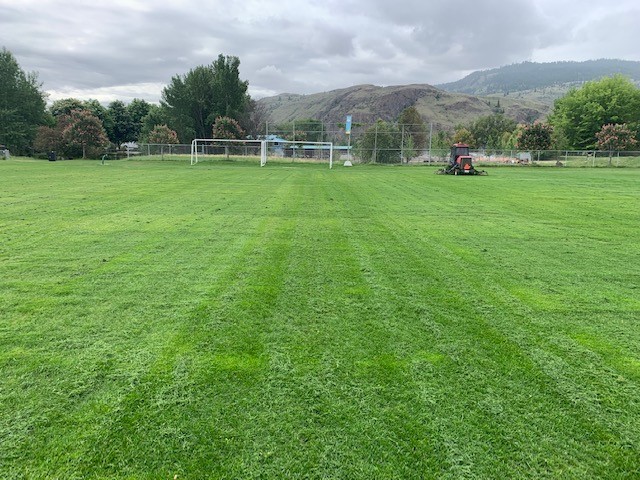 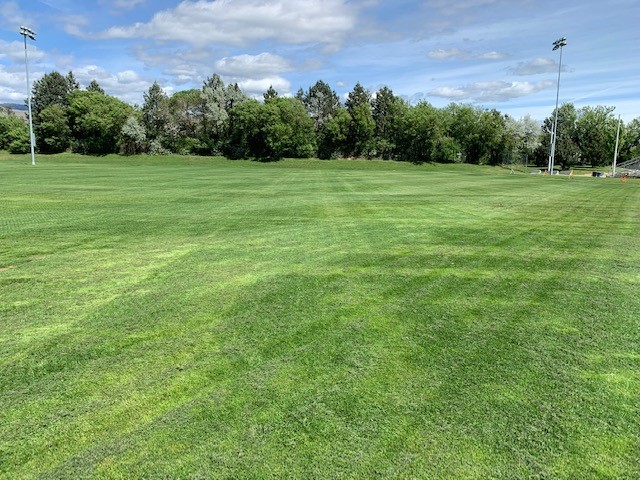 Whether it is removing Poa annua from cool-season turf or organic matter from warm-season grass, fraise mowing has been an accepted practice for renovating athletic fields for nearly a decade. Although it is an invasive practice, fraise mowing and other ultra-aggressive grooming practices also have a place in golf, says Jerad Minnick, a sports turf management consultant.

"If you have a problem with organic matter on a golf course, this can fix it," Minnick said during the recent Tennessee Turfgrass Association Conference and Show.

Fraise mowing utilizes hundreds of blades on a helix-shaped rotor that remove material from the surface, leaving behind what Minnick says are stronger, healthier plants that can be ready for traffic in a few days to a few weeks depending on how much is removed.

The process was developed in 1996 by Ko Rodenburg, a Dutch sports field manager, to remove Poa annua from cool-season sports turf.  True fraise mowing is performed with the Imants Koro Field Topmaker that was named for Rodenburg.

But similar aggressive grooming practices can be achieved with equipment from other manufacturers.  Fraise mowing often results in phrases such as "whoops" or "uh oh" when sports turf managers, superintendents or facility managers and administrators see just how much organic matter it displaces.

The material removed and how much depends on two factors: whether the surface is warm- or cool-season and the depth setting of the machine taking it out. A Kentucky bluegrass or ryegrass soccer field can produce 12 22-yard dumpsters of organic material, and a Bermudagrass field will yield twice as much, Minnick says.