UBC Athletics and Recreation recently acquired a new helper to paint lines and logos on sports fields at the Vancouver campus: meet Robby the robot.
via UBC 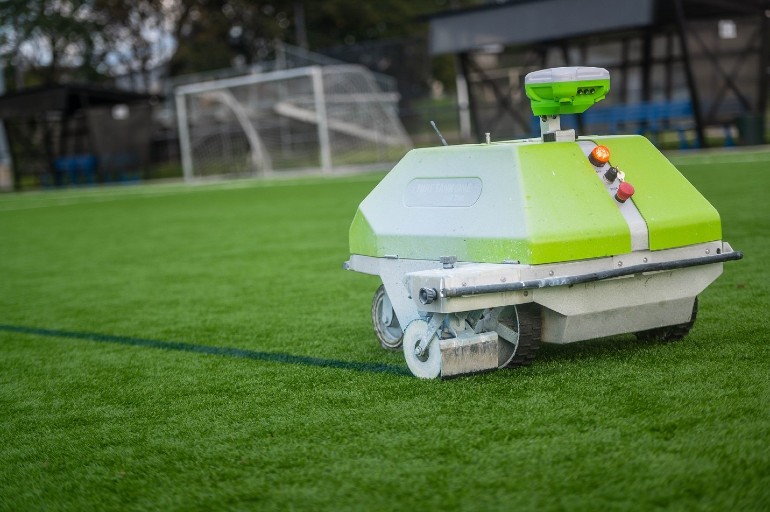 You may be thinking of Robby from Forbidden Planet, the humanistic robot that can speak 187 languages, lift 10 tonnes of lead or even create a sparkly evening gown – but this Robby looks more like a green photocopier on wheels.

Some universities in the United States have already adopted this autonomous field painting robot, but Robby is the first of its kind in Canada.

Lining the up team
Gary Bartley, Head Groundskeeper for UBC Athletics and Recreation, brings over 20 years of experience in turf maintenance, managing synthetic and natural fields, and everything in-between.

When he joined the Vancouver campus in 2015, Gary and his team were tasked with maintaining all of the fields, which are home to the Vancouver Whitecaps, many UBC varsity programs, as well as community athletic groups.

“We have a responsibility to provide the best playing conditions for athletes, whether they are professionals, in varsity programs, or community members,” Gary explains.  “When one of our clients, the Vancouver Whitecaps, shared experiences of playing abroad on fields that were painted by robots, we wanted to find out more.”

To create a high quality experience for all field users, Gary reviewed trades publications for innovative new products, seeking ways to optimize and enhance operations. When he learned about Turf Tank, a robotic field painter from Denmark, designed to mark sports fields with near-perfect lines and circles, Gary realized it was time to expand his crew.

“We initiated a conversation with the Turf Tank distributor in the United States, and borrowed a machine to test paint fields on the Vancouver campus. We were impressed with the results and decided to purchase one for UBC, naming it after the legendary Robby the robot.”

Marking the fields – then and now
Before Robby joined the team, traditional line marking was a time and resource intensive activity. To paint a soccer field, it could take a full day for several people to make measurements, set up the lines with string, and push the manual line painting machine.

With Robby, painting lines for the same soccer field now takes an hour. On a regular work day, the operator ‘commutes’ with Robby to the location, selects the desired sport on a tablet, and sends Robby out to paint the field.

Each time, Robby paints with laser-like precision, using GPS to draw lines. On a clear day, Robby can paint with an accuracy of +/- 0.3”, mapping a field and painting lines autonomously. It works seven times faster than traditional line marking, while using substantially less paint. It can be programmed with 45 different field types and customized with logos and numbers.

“Robby has been great,” Gary continues. “We can be more responsive to requests and paint high-quality sports fields with less time, reallocating the hours to other priorities.”

Bringing in robotic support means that fields can be used more frequently – but even Robby has good days and bad days. Clouds and rain can block satellite connections and wind can affect stability, resulting in wobbly or incomplete lines. Paint can get plugged up in the nozzle or parts can wear out.

“The challenge with Robby is making sure he’s well-maintained,” Gary explains. “If you keep him ‘healthy’, he’ll perform to the best of his capabilities – same as any other employee.” 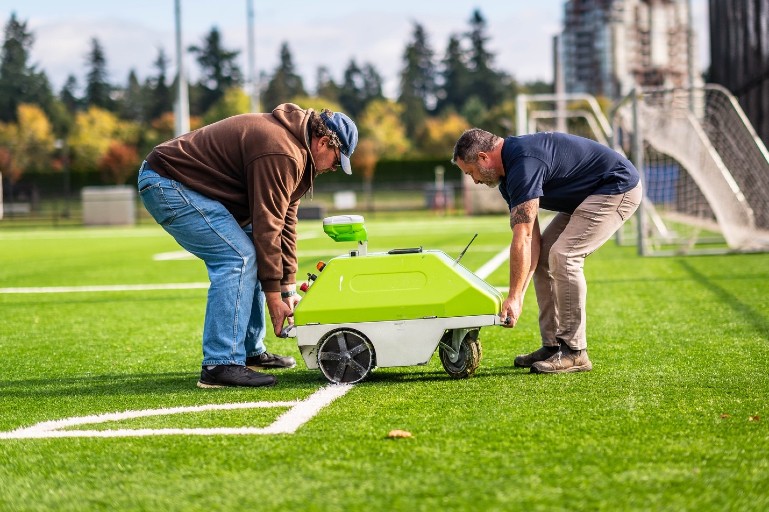 Gary and Andre are the primary operators for Robby the robot. Image credit: Paul Joseph

Gary continues to learn new ways to maintain the robot, program new skills and make the most of its abilities. More recently, Gary worked with a local company to program logos for Thunderbird Stadium, a feat that took eight months to develop.

Gary is also training new operators, such as Andre Dionne. Through the groundskeeping industry, news of Robby the robot caught Andre Dionne’s attention. Inspired by the opportunity to work with innovative turf maintenance technology, Andre joined the team as key operator for the robotic line marker.

“Robby and I have the closest relationship, and I do refer to him like he is a co-worker,” Andre shares. “There are days when we don’t get along, mostly because he glitches and doesn’t connect to the satellite transmitter or loses Wi-Fi connection, but I’ll still take him on his bad days, because he saves me a ton of time. With Robby on the team, we’re able to focus more on sports field maintenance and irrigation repairs, or ongoing tasks, like mowing, weeding, and line trimming.”

This unassuming robot has helped the team become more efficient and responsive to requests, but the best part about working with Robby is seeing kids’ reactions. “It just draws their attention. To them, Robby is a neat toy that wanders around the field on its own, painting perfectly straight lines and symmetrical circles – and they’re just in awe.”

With a busy sports season ahead, the artificial turf, natural grass, and hybrid fields are all in regular use across the Vancouver campus – so you’ll be sure to see the green machine at work soon. 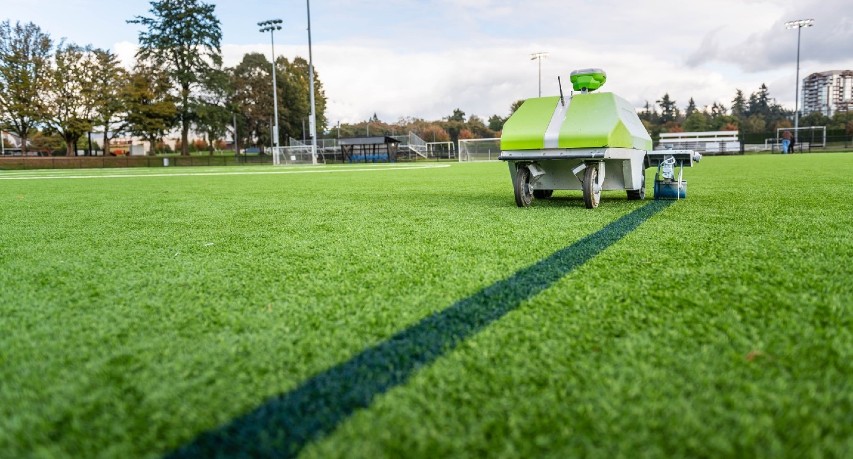 Ed. note: I happen to know that Andre Dionne is UBC's newest employee since he was hired after Robby😀.