A recent program called ‘American Savannah’ aired on CBC’s The Nature of Things with David Suzuki.  It was an interesting portrayal of North American’s ‘obsession’ with the growing of turfgrass and how this had come about.  They speculated that this ‘obsession’ may have come about as a result of our ancestral roots when man lived on the grassland savannahs of Africa.

The program ridiculed obsessed homeowners who cut their grass with scissors and turf managers ‘who were allergic to grass.’  And, of course, there was the opinion that pesticide and water were excessively applied to our turfgrass at great expense to the environment and human health.

Throughout the program there were statements such as ‘people started using DDT on their lawns sometime after the World War Two and that insecticides were applied through the irrigation system to ward off biting insects.  Then there was an ‘expert’ that attempted to bolster his credibility by stating that he had analyzed his neighbour’s lawn and found that the soil was dead presumably after applications of pesticides and fertilizers.  And finally, the statement that 96% of humans have pesticides in their bodies and the inference was that these pesticides must come from the homeowners lawns.

With statements such as this, small vocal groups have been able to sway public perception that the growing of turfgrass is a great abuse of our limited natural resources and has had a major negative effect on our environment.

They then asked the question, ‘can we really afford this ‘obsession’?’

This was actually a good question because now it offers up an opportunity to delve into the actual facts of the growing of turfgrass and whether this ‘obsession’ needs to be squelched.

Turfgrass is grown on more than 190,000 square kilometers (46 M acres) in North America and this more than any individual agricultural crop.  Information surveys have shown that homeowner lawns make up between 60-80% of this area depending on the geographical location (probably at the lower end in Alberta and the higher end in New York State).  This information shows that turfgrass is a large important crop and that there are benefits to turfgrass being grown in the urban environment.

The fact is that in the last century human activity has caused an increase in carbon dioxide (CO2) in our atmosphere due to land use changes and the burning of fossil fuels.  It has been found that turfgrass actually absorbs carbon dioxide from the air during photosynthesis and then sequesters (or stores) the carbon as organic matter in the soil.  In comparison to other crops maintained turfgrass is quite efficient in sequestering the carbon and one study showed that an average sized homeowner lawn sequestered about 100 kg of carbon per year. 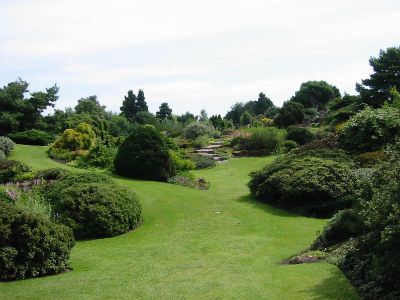 an average sized homeowner lawn sequesters about 100 kg of carbon per year, while the inputs for lawn management practices make up only 10-20% of the carbon sequestered.’ Photo credit: Edinburgh Botanic Gardens

However, the argument from the vocal naysayers would be that in order to capture all this CO2 we have to mow with a gas belching mower, apply fertilizers that use fossil fuels, and use water and energy to irrigate the lawn.  They are quick to point out that these inputs far exceed the sequestering of carbon.  In actual fact, when measured as carbon equivalents, the input for lawn management practices was only 10-20% of the carbon sequestration rate.

The final part of the program showed researchers who were using biotechnology to find grasses that could be used for turfgrass purposes that could be mowed less frequently, and would require less water, fertilizer and pesticides to maintain good quality.

So what does this mean for golf in Alberta and what role can research play in the future?

There is no question that when water use is considered, domestic use will always trump recreational use.  Therefore, we are going to have to be leaders in the utilization of grasses and cultural practices that will use less water.  In addition, we are going to have to employ better management techniques to reduce our reliance on fertilizers and pesticides.

However, with that in mind the Alberta Turfgrass Research Foundation (ATRF) must continue to find new ways to serve the industry that supports it.  In recent history, we have found that the cost of research has continued to increase, and we have struggled for revenue to keep pace.  In other words, there have been more questions than we could answer!

As a result, the ATRF is embarking on a new way to do business.  A new agreement has been structured with Olds College that will integrate the operations of the ATRF into the Olds College Centre of Innovation (OCCI).  As of July1, turfgrass research will become one of three priority areas within OCCI which will provide more opportunities for accessing public grants and networking.  This agreement will also provide for involvement in the decision making process of determining priorities for research and how these priorities might be funded.  One of the priorities is to employ a full time research scientist in the next 12 months to conduct research in the area of turfgrass.

This will require a change in the role of the ATRF.  We will still continue to disseminate information to the turfgrass industry and provide consulting services.  In addition, we will be the main participating organization on an advisory committee for turfgrass research.  The committee will have direct input into the development of priorities for research and the action plan to carry out this research.  The ATRF will also be actively involved in the development of the structure and responsibilities of this committee.

The benefit to the turfgrass industry and research is that funds donated to the ATRF will be used as a match towards grants for research.  It is our hope to leverage each dollar that comes into the ATRF coffers and match those funds at least 1:1.  In many situations, other industry partners may come on board and their support can be leveraged as well.  Many of the research granting agencies encourage this type of funding arrangement, as this shows a true ‘buy in’ from industry.

We are excited for the future of turfgrass research in western Canada.