Having an athletic field-based business, I have done work in several sports and am adding a new one every year.  One that keeps popping up year after year in other venues is the golf industry.

I first started by painting a blue line around the green for the no-cart area; I used blue because it’s hardly noticeable from the tee box. This led me to use blue to mark sprinkler heads on athletic fields as well as for marking locations for upcoming renovation because the color would not distract from watching the game.

While presenting at a turf seminar about painting for other events, I was approached by a golf course superintendent from Roseburg Country Club that hosts a tournament for Abby’s Pizza, an Oregon-based pizza chain that wanted to up their image of their event.  He handed my contact information to the marketing company and they quickly sent me the artwork of what they wanted painted for their 25th annual tournament.

Though it was a three-plus-hour drive from my city to the course in Roseburg, Oregon, I hoped I had all the materials and colors for the presentation. Since the requested artwork was quite large and there was not enough time to have a stencil made, I used the old technique of gridding the designated area to be painted.

For years it has been a taboo to mark the pristine turf on golf courses with decorations or logos, but with an increase in marketing and sponsor dollars the natural location for them has moved to strategic viewing sites.  Most of my painting is done freehand, as sometimes the design might not fit or the sponsor changes the artwork.

Quite by accident, I was asked if I knew anything about painting the Long Drive grid  and logos at the annual event. I mentioned I had seen the event on TV but was never involved. The thought of the process of laying out such an event piqued my interest.

Oddly enough, the next year Justin Kupper, a paint salesman from Pioneer Athletics, mentioned the event was being moved to the Winstar Resort in Thacherville, Oklahoma. He also mentioned that one of his customers, Tim Kemp of Devco, got the contract to lay out and paint the grid and logos. Tim’s background was in painting parking lots and football fields with little experience in logos, so getting me involved helped his confidence that he could do the job.

They started out by laying out the grid (much like laying out three football fields end to end). The terrain was wavy and it would have been difficult to keep the lines straight using a conventional painter, so a sled was used to slide along the grass and a riding painter sprayed in between the rails.  Once all the lines were painted, strings were run the entire length of the grid (usually they start at the 200-yard distance to 420 yards); those strings are used for the inside yard marks and the center of the sponsor logos on each side. Then pre-made visqueen stencils are laid out and dotted with the color of the outline, and the 15-foot yardmark stencil that I designed was used to paint yard marks on the inside and outside every yard from 200 to 420. Then another crew lays out three-digit six-foot-high number stencils and paints the outline in white, followed by filling them in with black. Both inverted aerosol cans and bulk paint sprayed with an airless painter are used to keep the job going. Then the logos get filled in with the designated colors. Since the event is over two weeks, the grid gets mowed and the entire layout gets repainted for the championship round.

Now I’m involved with other long-drive events in Mesquite, Nevada, and Denver, Colorado, as well as upcoming local golf tournaments to promote the sponsors’ businesses.  I have also done past golf events for a restoration company-hosted tournament, with their logo painted at a couple of signature holes at The Oregon Golf Club and 100-foot-high tree outlines with rolling hill at Palo Alto Golf Club.

I have painted logos for other events on a golf course for the Nike Cross Nationals cross-country race at Glendoveer Golf Course (where the runners run through a designated course throughout the fairways) and logos for LeMay Auto Museum in Tacoma, Washington, in hopes of being seen while they were taking blimp pictures of local areas for the U.S. Open in Chambers Bay. I have also done logos for Taylor Made Golf Clubs at their factory driving range in Carlsbad, California, introducing their new driver, The Believe, and another 3D version on their driving range in Las Vegas, the Taylor Made Golf Experience, promoting their new Loft club.

My son Andy has even gotten into the act by doing a logo at Fire Rock Golf course in Fountain Hills, Arizona, for their membership tournament and most recently on the Champions Tour in Iowa for the Principal Charity Classic. Usually those logos are placed near the club house on a slope or hill for the best viewing angle.

Things to consider when painting on the nicely mowed grass on a golf course are that white shows up well and is a good outline contrast for darker colors. Beware of the darker colors such as black during the hotter

times of the year as they draw in more heat and can damage the turf much like leaving a tarp on an infield. If you are using a stencil to lay out a logo, beware of using a clear visqueen material because if it is on the turf for much more than a half-hour it can burn and discolor the turf. So quickly dot out the pattern and fold up and store.

It’s always good to print out and laminate at least two copies of the artwork in case you have another helper. It helps to dot out the stencil with the corresponding colors so that it is easier to connect the correct colors.  Other less intrusive methods would be to use Green Lawnger or other turf colorants and do a watermark method so that the image is still viable but doesn’t distract from the event. With green you can have a perfect match of the grass looking into one direction of the sun and a very dark image looking in the opposite direction.

Now with the popular availability of drones, the artwork can be preserved for future archives and marketing. The angle and site line is very important as most of the recognition is from the paying patrons without the fantastic images from a drone. 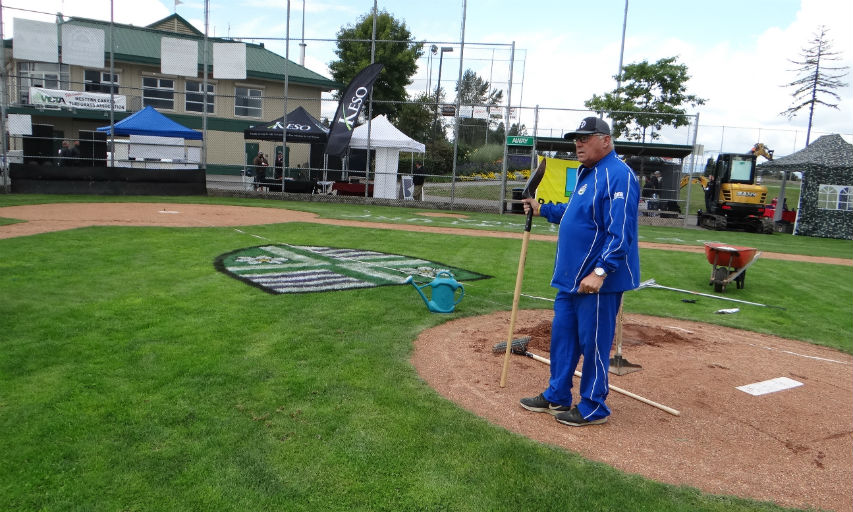 Mike Hebrard talks about mound maintenance at the 2017 sportsturf field day held at Aldergrove Athletic Park.  He painted the Township of Langley crest the evening before.  He can be reached at (503) 698-6383 or hebrard@athleticfield.com. 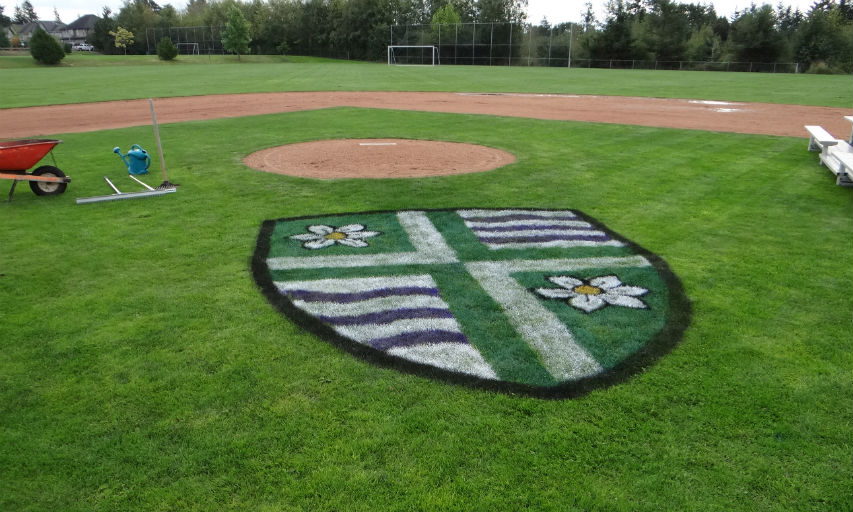